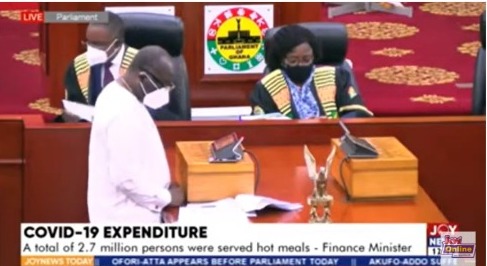 Finance Minister, Ken Ofori-Atta has stated that an amount of GH₵1.049 million out of GH₵1.522 million was spent on health response supplies for health workers.

Mr. Ofori-Atta made this revelation on the floor of Parliament on Wednesday while accounting for public funds spent on the Covid-19 pandemic between 2020 and 2021.

Breaking down the amount, he said GH₵2 million was allocated for the “busing of health workers within Accra, Tema, Kumasi & Kasoa to and from work for the duration of the lockdown by GAPTE (Aayalolo) and Metro Mass Transit (MMT).”

He disclosed that a total of GH₵80 million was also budgeted to pay an allowance of 50 percent of the basic salary to frontline workers, adding that “All requests have been reconciled and paid.”

According to the Finance Minister, “a total of GH¢1,440 million was programmed for the provision of PPEs, testing kits and medical equipment as well as to undertake community engagements.

“Other expenditure includes communication, quarantine, and treatment for COVID-19. An amount of GH¢1,008 million was utilised,” he said.

In all, 111 District, Regional and Mental Hospitals (Agenda 111) were programmed for construction.

He said, “a total of GH¢600 million was released to begin the construction across the country in 2020.”