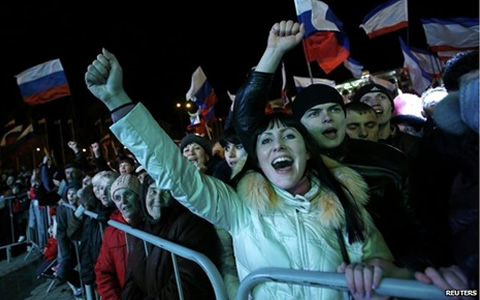 The United States and Europe targeted 28 Russian and Ukrainian officials with sanctions over the crisis in Crimea on Monday. But they stopped short of measures that would hit trade.

Western nations have decried Russian military intervention in Ukraine's southern region. They say a huge vote Sunday by Crimeans in favor of joining Russia was illegal, and warned of further action if Moscow takes steps to annex the Black Sea peninsula.

The U.S. government went after more senior Russian officials with similar measures, including close advisers to Russian President Vladimir Putin and a Russian deputy prime minister. It also moved to ban entry to the U.S. and freeze assets held by any Russian government official, or people with close financial ties to the named individuals.

"Our current focus is to identify these individuals and target their personal assets, but not companies that they may manage on behalf of the Russian state," the White House said.

EU officials said the sanctions were designed to send a strong message to Moscow, while keeping open the option for diplomacy, or tougher measures if necessary.

"It is possible to add to these measures of course … depending on how Russia reacts to the referendum in Crimea, and how they react to the possibility of discussions and direct negotiations with Ukraine over the coming days," British Foreign Minister William Hague told reporters.

The focus on individuals, rather than Russian companies or trade, reflects concern that a new Cold War could hurt the region's fragile economic recovery.

"U.S. sanctions on Russia are unlikely to have any impact on trade and, most importantly, on Moscow's position in relation to Crimea and Ukraine," noted Wolfango Piccoli, managing director of political risk advisers Teneo Intelligence.

In a reminder of the close economic ties with Europe, Russian investors poured billions of dollars into two corporate deals Sunday and Monday.

Russian markets have been slammed this year, although they bounced back Monday. The main stock market index had fallen by roughly 20% since the start of the year, and the ruble plunged to record lows against the dollar last week.

Investors pulled $33 billion out of the country in January and February, and that figure could hit $55 billion by the end of March, according to Russian investment bank Renaissance Capital.

Russia faces a hefty bill for supporting Crimea. The region currently depends on Ukraine for roughly 70% of its budget, 90% of its water, and most of its energy and food supplies.

Still, as long as the crisis doesn't spill over into other parts of Ukraine, analysts believe a full scale trade war should be averted and Russia will keep pumping critical supplies of energy to Europe.

In its weakened economic state, Russia can't afford to lose export revenues. And the threat of a suspension of gas supplies is less potent than the last time it happened — in 2009 — because European gas stockpiles are higher and the weather is getting warmer.