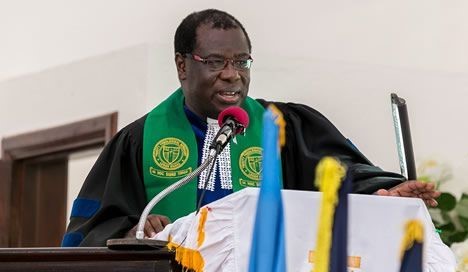 Moderator of the General Assembly of the Presbyterian Church has some strong words for persons who are criticizing the government’s bid to improve upon healthcare infrastructure in the country.

Rt. Rev. Prof. Joseph Obiri Yeboah Mante is not enthused by the manner in which the recently launched Agenda 111 has been received by a section of the general public, who he believes, have no good to offer the nation.

The project is expected to see the construction of 111 district hospitals, regional hospitals, and two new psychiatric hospitals.

Many have questioned the rationale behind the project when some health facilities under previous administrations have stalled.

The Moderator took an opportunity he had, at the commissioning of the Assin Praso Presby hospital in the Central Region, to address the development. He described the critics of the project as witches who seek to derail the government’s works.

“We’ve allowed politics to dominate our lives to an extent that we do not have good hospitals… If someone says he is coming to construct 111 hospitals and you are angry about it, you are a witch. For the pastors who want to exorcise witchcraft, deal with those critics,” he told the gathering.

Rt. Rev. Prof. Mante who also doubles as the Chairman of the Christian Council rallied support for the initiative to improve the healthcare of the populace.

He, nonetheless, charged the government to remain committed to delivering the project in order to ensure that, the vision becomes a reality.

“We’re waiting for you to construct the hospitals. If you don’t, we shall criticize you. More importantly, do not build sub-standard hospitals and clinics,” he said.

President Akufo-Addo says the project will play a critical role in making Ghana the centre of excellence for medical care in West Africa by 2030.

Government has already secured 88 different parcels of land for the Agenda 111 project which is estimated to cost $17 million per hospital and completed in 17 months.