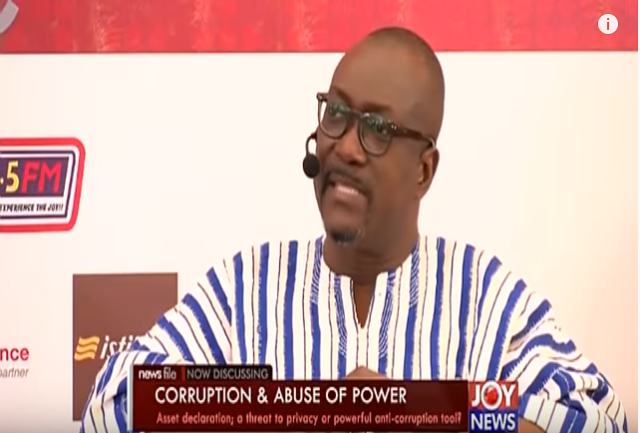 The executive director of the Ghana Center for Democratic Development (CDD-Ghana), Prof. H. Kwasi Prempeh, says the country’s current asset declaration regime is ineffective in the fight against corruption.

“I think the assets declaration regime that we currently have is for many of us, almost a toothless bulldog.”

Speaking on JoyNwes’ Newsfile programme held at the University of Professional Studies, Accra, Saturday, December 28, Prof. Prempeh said the current asset declaration regime was of such an insignificant standard to hold public office holders accountable to it.

“It is such a minimum standard; you declare, it’s sealed, the public does not have access to it, [the public] can’t come with evidence to challenge what you’ve declared to own or to owe and all of that. So it’s a pretty really minimal standard, not, for me, sufficient as part of the toolkit in the fight against corruption.”

He said this in response to a question asked by investigative journalist, Manasseh Azure Awuni concerning the yet-to-be-sworn-in Chief Justice Kwasi Anin-Yeboah’s inability to declare to his assets before he was sworn in as a judge at the High Court and the Appeals Court judge.

According to Manasseh, Justice Anin-Yeboah’s inability to declare his assets at those times of his career, serves a precedent for others to also refuse to declare their assets.

“If the President goes ahead to swear him in, can we ever hold any person responsible if they don’t declare their assets?”

Justice Anin-Yeboah had revealed, during his Parliamentary vetting, that before being sworn in as a High Court judge and later as a judge at the Appeals Court, he had not declared his assets.

He had, however, declared his assets privately when he was appointed a Supreme Court judge.

Prof. H.K. Prempeh in relation to that said, the inquiry into asset declaration should have been the work of the Executive and not the Legislature as it had happened.

“It’s important enough that it should have been the task of the Executive to do that behind closed doors before putting the nominee out than to be exposed in that way.”

According to him, the lax nature of the executive arm of government concerning asset declaration has diminished its significant role in the fight against corruption.

“If you intend to nominate a person, among the things you do in a due diligence test, you should call them in and run them through a battery of questions. ‘Have you declared your assets? Did you do this? Did you do that?’ This is not something that should even get to Parliament”, he said.

This he claims will be a more effective way to deal with corruption in the country.

DISCLAIMER: The Views, Comments, Opinions, Contributions and Statements made by Readers and Contributors on this platform do not necessarily represent the views or policy of Multimedia Group Limited.
Tags:
CDD
Prof. H. Kwasi Prempeh