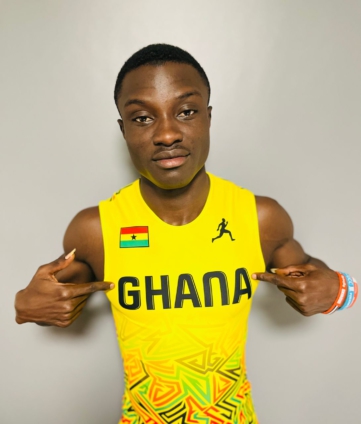 Track and field athlete, Abdul-Rasheed Saminu has expressed delight with his Commonwealth debut which saw him finish 3rd in Heat 2 of the 200m event.

It was the first time Saminu was racing in the event since 2019, at the Africa Junior Championships, where his time of 21.58s left him 5th in the heats. But the 20-year-old, a 100m specialist, set a new personal best of 21.32s, and is excited with his progress.

“I’m feeling so good and very proud of what I have gone out there to do. I haven’t been training for the 200m – always concentrated on the 100m and I thought I was coming to race in only the 100m and 4x100m, but I didn’t get the chance to enter those events, only the 200m so I just accepted it and to do my best,” Saminu told JoySports.

Saminu was in lane 3 for the event, right next to Udodi Chudi Onwuzurike [lane 2], so he had a front row seat next to the man to beat in that particular heat. But both racers were upstaged by Pakistan’s Shajar Abass who won the heat with a time of 21.12s.

The Ghanaian had a great reaction to the gun, getting off to a good start before negotiating the bend efficiently. Coming out of the bend, Saminu was only behind Nigeria’s Onwuzurike but lost the second spot to the Nigerian, as Abass switched gears after the bend and took charge of the final 100m.

After crossing the finish line, Saminu and Onwuzurike ultimately, realized they had lost the race to an individual they least suspected, yet Saminu had executed his strategy almost perfectly.

This year, Saminu has made representations for the University of Ghana and Ghana itself, at the FASU games held in Kenya, and the Relay Invitational in Nigeria for both the 100m and 4x100m event. Nonetheless, his debut in the Commonwealth Games is the biggest platform of his career so far, and the moments on the track before blast off, were simply surreal.

“The crowd was very mad,” Saminu recounted with a large grin on his face. “I kept asking if I was really the one. People from my hometown texted me earlier to tell me they were watching so I should go and do my best – so when I saw myself on the big screen, I asked ‘is this me?’. But I got all of that off when I heard ‘on your marks’.”

Saminu’s next focus at the Commonwealth Games will be the men’s 4x100m relay, where he will run Ghana’s 3rd leg.