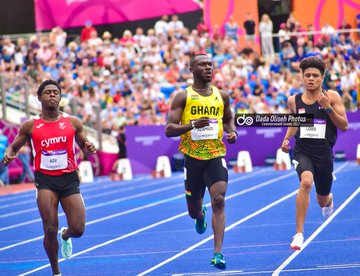 University of Ghana track and field athlete, Abdul-Rasheed Saminu, is excited about the prospects of racing with national 100m record-holder, Benjamin Azamati, at this year’s Commonwealth Games.

Saminu will join Ghana’s 4x100m relay team for the event, following the absence of Emmanuel Yeboah and Joseph Oduro Manu, who run the team’s third-leg as they set a new national record at the 2022 World Athletics Championships.

Saminu, one of two replacements alongside University of Development Studies’ Barnabas Agerh, was a part of the University of Ghana’s 4x100m relay team, running the second-leg as they won the event with a time of 39.38s in the final.

And now he will take a place alongside Azamati, Joseph Paul Amoah and Sean Sarfo-Antwi, running the third leg as Ghana go in search of a medal in the event.

“He’s my big man, he inspires me a lot. Anytime I see him, I feel good and ask ‘whoa, is this our record holder?’,” Saminu said with laughter. “Anytime he sees me run, he advises me on what to change, and also gives me techniques I can add.”

In just about two weeks, the team converges again in Birmingham, where they’ll look to end the stories of ‘nearly’, and bring to fruit their promise by securing a medal. And as a new member of the team, Saminu understands the task ahead.

“It’s a great exposure for me to be part of team Ghana 4x100m team, and I’m hoping to do my best for Ghana. We want to bring the gold home, but it is not going to be easy.

“We are just about going for practice to prepare for tomorrow,” Saminu told JoySports before the team’s penultimate session for the event.

The 4x100m team will be in lane 5, Heat 2 of the event with fellow Africans, Nigeria and Kenya, who are beginning to make a case for themselves in the sprint events. The first three from each heat, and fastest two times will advance to the final.

Before the men however, Ghana’s 4x100m women’s relay team will represent the country in Heat 2 where they will compete with Nigeria, Australia and hosts, England.