Cyclone Idai: Tell the world we are suffering – Mozambique survivors 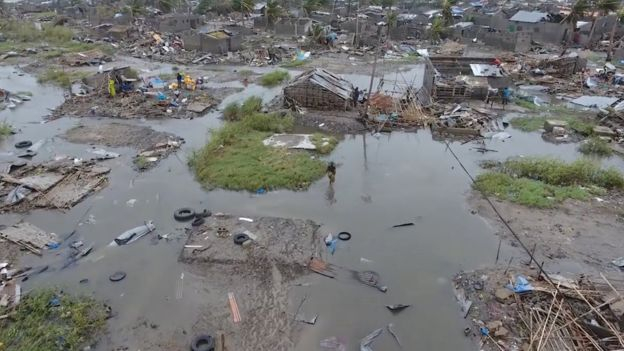 Mozambique's port city of Beira is reeling from the damage inflicted by Cyclone Idai.

So far 200 people have been confirmed dead in the southern African country, along with another 100 in neighbouring Zimbabwe, but the death toll could be much higher.

Those who survived the disaster have had little reprieve to mourn the loss of their loved ones or salvage the little that is remaining of their belongings. They are in desperate need of food, shelter and clothing, as the BBC's Pumza Fihlani reports from Beira.

Inside a makeshift response centre at the airport in Beira, aid agencies are scrambling to get to those still trapped across the region.

It's the first point of call for all the teams coming in from around the world and offers the first glimpse of how heavily this operation is relying on outside help.

A few kilometres away, panic is setting in. The people of Beira are growing anxious – help is coming, but it is really slow and not nearly enough.

"I have nothing. I have lost everything. We don't have food. I don't even have blankets. We need help," one woman tells me as we make our way through the village of Manhava. 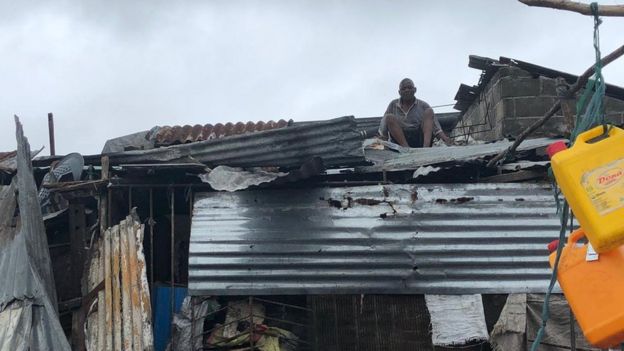 Some people have been trying to repair their houses

Beira's geography, with parts of it lying below sea level, has always made it vulnerable to effects of extreme weather like Cyclone Ida which made landfall last week with winds of up to 177 km/h (106 mph).

The city bore the full brunt of the destructive storm, which triggered flooding of the whole city and knocked down buildings and cut off roads. This is now stalling rescuers from reaching desperate people in need.

Some people here are trying to salvage what they can to create shelter. Those who can are repairing their metal roofs, while others are tying together pine branches to sleep under.

Homes have been damaged, some even completely destroyed, and there are pools of water everywhere.

A local church has become a temporary home for scores of people. Half of its roof was blown off, but the walls have held and to some it is better than being out in the cold. 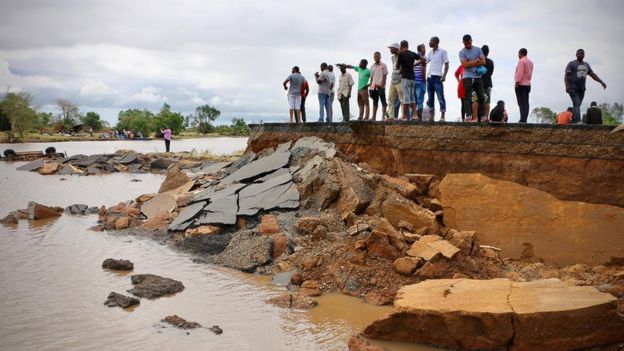 Floodwaters have cut off roads and knocked down buildings

The UN has said that Cyclone Idai triggered a "massive disaster" in southern Africa, affecting hundreds of thousands if not millions of people.

Neighbouring Zimbabwe and Malawi have also been affected by the freak storm that has caused the deaths of dozens and displacement of thousands of people. 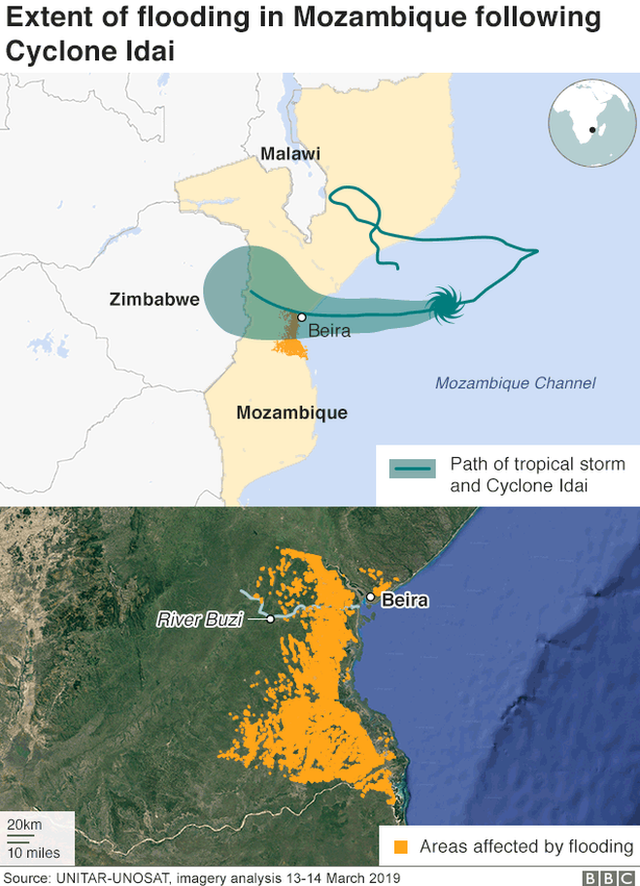 Everyone we come across here is begging us to come into their homes to show us what they have lost and how nature has stolen from them.

We are the first people they have seen since the cyclone hit on Thursday night.

"Please help us. Tell the world we are suffering. We don't know where we are going to sleep," says Pedro, a father of three children – all under the age of 10.

The residents here feel like they have been forgotten. 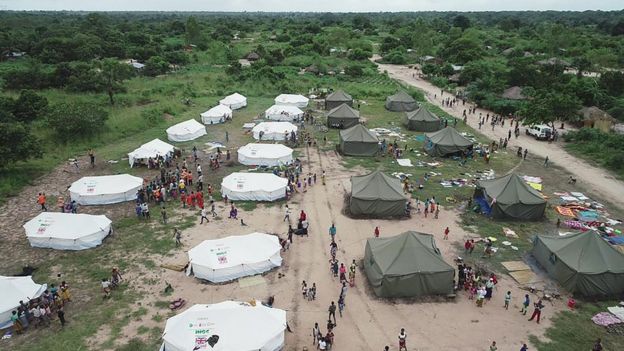 A UN camp for the people displaced in Beira

As the full picture of this crisis slowly becomes clear, there are questions about whether the government of Mozambique could have done more to prepare for the disaster.

The floods of the year 2000 claimed hundreds of lives and yet some here feel lessons have not been learned.

"Our city was destroyed so easily because our infrastructure is not taken care of. Every time there is a problem here we need foreign countries to save us. What is our government doing, what is our own plan?" our driver asks me.

Back at the airport, a helicopter has just landed and rescue workers rush out, carrying in their arms children whose eyes are wide with fear.

"Many villages have been washed away. We found women and children holding on to trees. We are doing what we can," said one of the rescuers.

Many of those trapped are trying to get to higher ground but persistent rainfall has been hampering rescue operations.

Those rescued are being taken to a network of 56 camps dotted across the region.

More rains are expected and those who made it to safety are the lucky ones. Mozambique President Felipe Nyusi has said more than 100,000 people are at risk – and there is growing concern that help may not get to them in time.