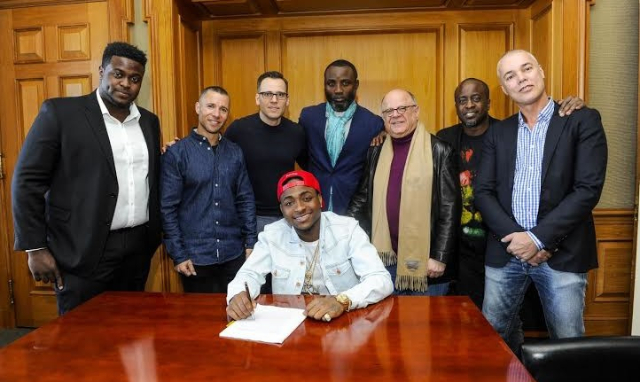 HKN boss, David Adeleke, a.k.a Davido, O.B.O, during the week reacted to comments that have been trailing his new deal with international music company, Sony BMG.

You would recall that the ‘Aye’ crooner recently signed a deal with Sony Music, which according to him, would facilitate an easy and widespread marketing of his music in the western world and beyond.

Shortly after the signing, mixed feelings and reactions began to trail it. Fellow artistes, acquaintances, fans and critics took to their twitter and Instagram pages to air their opinion and feelings on the new development. A good number of his fans were optimistic about the career step, but others expressed their utmost discontent. Until yesterday, the latest Sony Music

Signee was silent about these reactions. After a supposed conscious or unconscious restraint (as the case may be), Davido finally expressed his feelings on the vibe he had been getting since he broke the news of his new signing with Sony Music.

According to Davido, “I’m getting too much money to be worried about social media!! Shit ain’t real here.” He seems unperturbed by the series of tantrums being thrown at him ever since his announcement. Davido is unflinching in his resolve to step up his career game, irrespective of anybody’s opinion. He already said it in one of his songs ‘Owo ni koko’, meaning ‘Money is the ultimate’. Therefore, pessimists & critics can continue to ‘bad belle’ because ‘it’s allowed’.