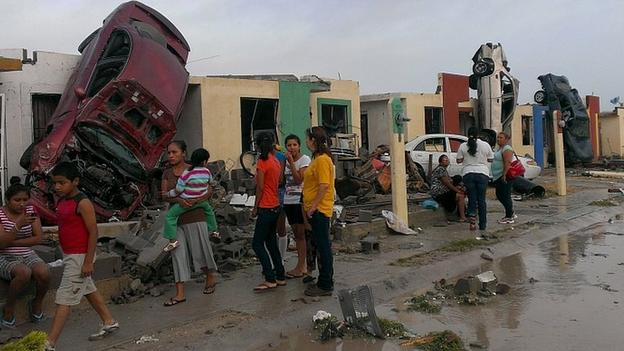 At least 13 people have been killed by a tornado that hit the northern Mexico border city of Ciudad Acuna.

Hundreds of homes have been damaged or destroyed in the city, in Coahuila state, just across the border from Del Rio, Texas.

The US state has seen severe flooding, with four killed and a dozen missing.

Images from Mexico showed cars and buildings badly damaged. Many people have been injured and there are fears the death toll could rise.

Coahuila Governor Ruben Moreira, on a visit to the stricken area, said 10 adults and three children had died and a baby was missing. Another 150 people had been taken to hospital, he said.

The authorities say that more than 1,000 homes have been damaged by the storm.

At one point the tornado reached a speed of 270-300km/h (168-186mph). Most of those who died were walking on the street when it struck, officials said.

Ciudad Acuna Mayor Evaristo Lenin Perez said that it was the first tornado to hit Acuna since the city's foundation, more than 100 years ago.

Rescuers were searching the 750 damaged properties for more casualties.

"There are cars on top of houses, there are dead people lying in the street, it is total chaos," said local resident Maria del Rosario Ramirez, quoted by Mexican newspaper La Jornada.

The BBC's Katy Watson in Mexico

The tornado only lasted a short moment but that was enough to devastate a community. It struck at a busy time in the morning – people were driving or taking public transport to work. Cars were catapulted towards buildings, roofs ripped off and many vehicles left upended.

Residents of Ciudad Acuna are used to hearing about this sort of thing north of the border in Texas, not experiencing this first-hand. The infrastructure clearly wasn't strong enough to stand up to the impact – the army is helping to search for missing people and neighbouring states have also said they will lend a hand in the rescue effort.

Mexican President Enrique Pena Nieto expressed his "solidarity" with the relatives of the victims and said he would travel to Ciudad Acuna later on Tuesday.

He said the government would "take stock of the damage and provide all appropriate support".

Victor Zamora, Coahuila's interior secretary, said an area of about seven blocks had been "devastated" by the tornado, which struck at about 06:10 (11:10 GMT).

Civil protection officials said that eight temporary shelters had been set up for those made homeless by the disaster.

In the southern US, warnings and alerts stretched from Colorado through to Arkansas, Louisiana, Missouri and eastern Kansas.

Twelve people were missing after flash floods struck the Blanco river in central Texas on Sunday.

Texas governor Greg Abbott said it was the worst flooding the state had seen, and that the wave of water had a "tsunami-like" power.

He has declared a state of disaster in 24 counties of the state.

In the city of San Marcos, residents were forced to evacuate as the flood waters rose after torrential rain that turned streets into fast-flowing rivers, with cars and trucks under water were and people using inflatable lounge chairs to make their way down the street.

The floods damaged hundreds of homes, some of them swept off their foundations.

At least three deaths have been linked to the flooding in Texas since Saturday, the latest being a 14-year-old boy who was found with his dog in a storm drain in Dallas. Two people have died in Oklahoma.

A tornado also damaged a block of flats in Houston over the weekend.