Supporters of Pope Francis have rushed to his defense after a former top Vatican official launched an unprecedented attack on him, a move they say
dangerously escalates a campaign to weaken his papacy by conservatives who condemn him as too liberal.

Francis' supporters say the accusations in Archbishop Carlo Maria Vigano's 11-page public statement aim to pave the way for a conservative pope to succeed him who would reverse his openings to divorced and homosexual Catholics.

In the statement published at the weekend, Vigano, the former Vatican ambassador to Washington, called on Francis to resign on the ground that the pope knew for years about the sexual misconduct of an American cardinal and did nothing about it.

Vigano said he told the pope himself five years ago, little more than three months after Francis' election. He included no supporting documents in the statement and has not been reachable for comment since it was published.

On his flight home from Ireland on Sunday, Francis told reporters he would "not say one word" about the accusations. "Read the document carefully and judge it for yourselves," he said.

Supporters say the statement contains holes and contradictions and point to the fact that Vigano wrote it with a journalist who has been critical of Francis as evidence that it forms part of an ideological anti-Francis strategy, which the
journalist denies.

Both sides were digging in for what they have cast as a potentially defining battle over Francis' push for a more inclusive church. 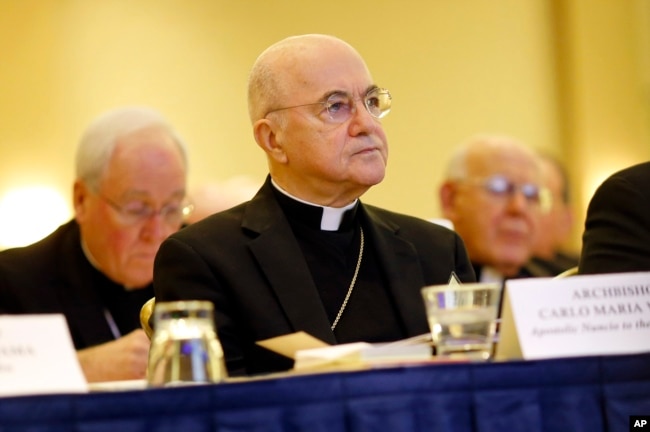 Vigano's supporters in Italy and abroad praised the former diplomat as following his conscience.

"Vigano is a loyal churchman. … if he is making these allegations now, and calling for Francis' resignation, it is for the gravest reasons," George Weigel, senior fellow in Catholic studies at the Ethics and Public Policy Center in Washington, D.C., said in an email.

Conservatives have previously based their attacks on the pope on doctrinal grounds. Now, his supporters say, they have raised the stakes by accusing the pope and other Vatican and church officials of personally failing to act on a case of sexual misconduct.

Vigano's statement, signed August 22, was released four days later by conservative media outlets during the pope's trip to Ireland, where sexual abuse was a main theme.

"It really seems like an obvious move by conservatives to delegitimize Francis," said David Gibson, director of the Center on Religion and Culture at Fordham University in New York. "This whole thing was carefully coordinated with conservative Catholic media and carefully timed."

Gibson said he believed conservatives were laying the groundwork for one of them to be elected as the next pope by damaging Francis' legacy before he dies or resigns. "It's the start of the campaign for the next conclave," he said.

The statement was co-written and edited by Italian journalist Marco Tosatti, who publishes a daily blog called Stilum Curie that is critical of Francis.

Tosatti said there was "no conservative conspiracy" behind the statement and that it was released as soon as it had been translated into other languages.

"The fact that it was released while the pope was in Dublin was a mere coincidence," he said.

Vigano wrote that Francis and his predecessor Benedict, among others, knew for years about sexual misconduct with adult seminarians by former Cardinal Theodore McCarrick, the emeritus archbishop of Washington, who quit last month in disgrace. 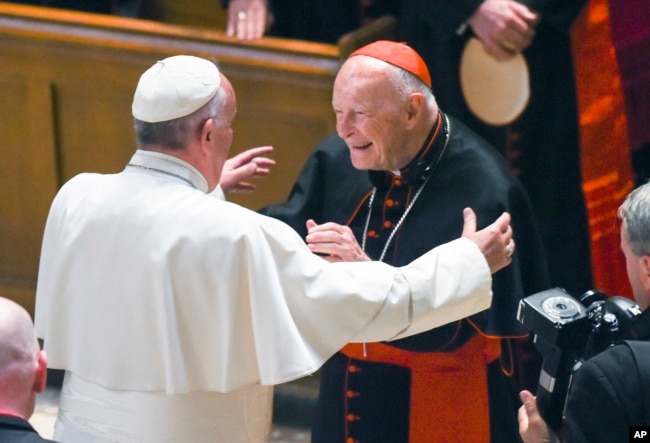 FILE – Pope Francis reaches out to hug Archbishop Emeritus Theodore McCarrick after the Midday Prayer of the Divine with more than 300 U.S. bishops at the Cathedral of St. Matthew the Apostle in Washington, Sept. 23, 2015.

In June, American church officials said allegations that McCarrick sexually abused a 16-year-old boy almost 50 years ago were credible and substantiated. That charge, which McCarrick denies, is what led to his resignation. He has not commented on his alleged sexual misconduct with seminarians.

Vigano alleged that Benedict, after being told about the allegations involving McCarrick and the seminarians, ordered McCarrick to retreat to a life of prayer and penitence and refrain from public ministry. Vigano said he could not remember what year the alleged sanction, which was never made public, was imposed. The Vatican usually announces such sanctions.

Vigano said he told Francis everything about McCarrick's case on June 23, 2013.

Cardinal Donald Wuerl, McCarrick's successor as archbishop of Washington, said in a statement on Monday that Vigano had not produced "any objective, verifiable proof" of his assertion.

McCarrick, who has not been seen in public since his resignation, could not be reached for comment.

Benedict's secretary, Archbishop Georg Ganswein, told Reuters the former pope had no comment on the statement.

Bloggers and journalists have found pictures of McCarrick at church functions, including at least one in the Vatican, in the years after Vigano said Benedict had ordered the former cardinal out of the public eye.

Vigano is part of a small, vocal group of conservative prelates, most of them retired or sidelined by Francis, who have balked at his calls for the church to be more welcoming to homosexuals and divorced Catholics.

Their de facto leader is American Cardinal Raymond Leo Burke. In 2016, Burke and three other cardinals wrote a public letter known as The Dubia, accusing Francis of sowing confusion on moral issues.

In April this year, Vigano attended a conservative conference, titled The Limits of Papal Authority, where Burke was the main speaker. Tosatti was also there.

Some conference participants openly referred to Francis as the precursor of the coming of the anti-Christ and the end of the world. The conference agreed to a declaration saying "a grave danger to the faith and the unity of the church" had emerged under Francis.