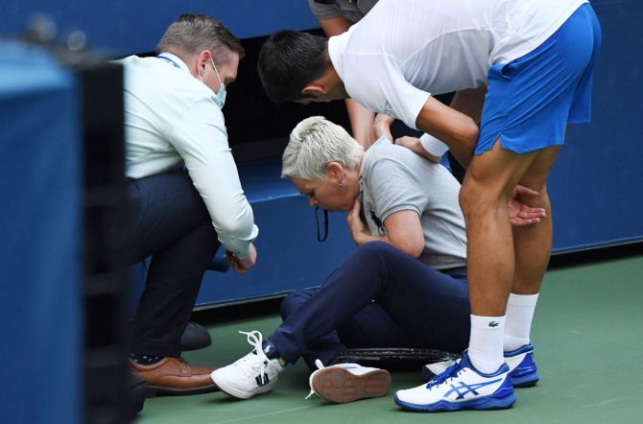 Novak Djokovic has apologised for hitting a line judge with a ball at the US Open, saying he is “extremely sorry for creating her such stress”.

The world number one was disqualified from his fourth-round match against Spain’s Pablo Carreno Busta.

The Serb, 33, who had just had his serve broken, took a ball out of his pocket and hit it behind him, striking the woman in her throat.

“This whole situation has left me really sad and empty,” said Djokovic.

“I checked on the linesperson and the tournament told me that thank God she is feeling OK.

“I’m extremely sorry to have caused her such stress. So unintended. So wrong. I’m not disclosing her name to respect her privacy.”

After a lengthy discussion, Djokovic was defaulted by tournament officials at Flushing Meadows.

He will lose all ranking points earned at the US Open and will forfeit the prize money he had won at the tournament. He could also be fined for the incident.

“As for the disqualification, I need to go back within and work on my disappointment and turn this all into a lesson for my growth and evolution as a player and human being,” Djokovic added in a statement on Instagram.

“I apologise to the US Open tournament and everyone associated for my behaviour. I’m very grateful to my team and family for being my rock support, and my fans for always being there with me.

His exit ended his hopes of winning an 18th Grand Slam title and narrowing the gap on Rafael Nadal (19) and Roger Federer (20) in the race to finish with the most men’s major wins.

Djokovic showed his frustration after losing serve to trail 6-5 against Carreno Busta in the first set.

He also showed a flash of temper two games earlier at 5-4 – whacking a ball into an advertising board after the Spaniard saved three set points.

Leon Smith, Great Britain’s Davis Cup captain, said he was “surprised” Djokovic did not get a warning for that incident, and felt one might have prevented the controversy which followed.

After Djokovic was defaulted, Smith told BBC Radio 5 Live Sports Extra: “There has to be consistency, if someone hits a ball with that much venom and temper, call a warning.

“The second one can be dangerous and so it proved to be.”

Djokovic pleaded his case with tournament referee Soeren Friemel and Grand Slam supervisor Andreas Egli during a long conversation at the net.

Eventually, however, he accepted his fate and shook hands with Carreno Busta, who looked shocked by what had happened as he waited in his chair for a decision.

Friemel said that there was not “any chance of any opportunity of any other decision other than defaulting Novak because the facts were so clear, so obvious” and that there was “no discretion involved”.

More controversy for Djokovic in a contrasting 2020

Going into the fourth-round match against Carreno Busta, Djokovic was aiming to extend his unbeaten run in 2020 to a 27th victory.

Instead of receiving more plaudits for his on-court performances, he made an undignified exit in what became the latest controversy involving him this summer.

In June, Djokovic was one of several players – along with Grigor Dimitrov, Borna Coric and Viktor Troicki – who tested positive for coronavirus after playing at the world number one’s Adria Tour competition.

Djokovic apologised for staging the exhibition event in the Balkans, which was held in front of fans and without social distancing rules being observed.

The first leg in Serbia attracted 4,000 fans, and players were later pictured dancing close together in a Belgrade nightclub.

In Croatia’s second leg, players were pictured taking part in a basketball match.

Djokovic said they had “met all health protocols” in the two countries, which had relatively low levels of recorded Covid-19 cases at the time.

After announcing his positive test, he conceded it had been “too soon” to stage the event.

In the midst of the pandemic, Djokovic was accused of being opposed to vaccines – something which he later denied – and also drew criticism for saying water could be purified by positivity.

On the eve of the US Open, he found himself at the centre of more controversy after driving the creation of a new players’ union.

Djokovic and Canadian Vasek Pospisil led about 70 players in forming the Professional Tennis Players’ Association, with those joining unhappy at the ATP’s governance and wanting to increase the power of the players.

Nadal and Federer were among those who opposed the new union and questioned its timing, while Britain’s former number one Andy Murray called for WTA players to be involved.

DISCLAIMER: The Views, Comments, Opinions, Contributions and Statements made by Readers and Contributors on this platform do not necessarily represent the views or policy of Multimedia Group Limited.
Tags:
Novak Djokovic
Tennis
US Open
US Open 2020