Disqualified Konadu demands justice, as she seeks to injunct 2012 polls 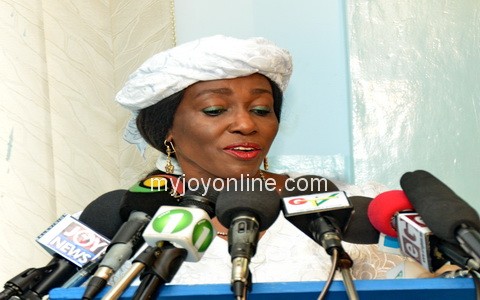 The flagbearer of the National Democratic Party, Nana Konadu Agyeman-Rawlings is up in arms against the Electoral Commission for what she described as injustice meted out to her.

The EC had explained that it disqualified the NDP because they failed to meet the requirements for filing their nomination forms, but the party believes there is more to the explanation given than meet the eyes.

Mrs Rawlings told the media that the party would take legal action to sanitise the system, if the EC stood on its grounds to keep her out of the race to the presidency.

She however discounted any personal attachment or interest in taking the matter to court.

She explained, “The issue of the law being fair and unfair comes into play; so we all want the law to be fair to every citizen of this country…so indeed, personal feelings don’t come into this matter: is the law fair or is it not?”

The NDP’s national Chairman, Josiah Aryeh reechoed the party’s position, and emphasised that they will proceed to court to seek an injunction to stop the EC from proceeding with the December elections if their formal protest is not considered favourably.

“We must file an injunction to prohibit the Electoral Commission from continuing the process,” he asserted.

He also explained that the party is heading for court because “there is a serious question to be tried. Because the EC has rules and it is violating it rules, and not being fair”.

Meanwhile, a private legal practitioner, Egbert Fabile Jnr told Joy News it was wrong for the EC to set a specific date for the filing of the nomination forms under Regulation 7(2b) of C.I. 15.

He said even though the C. I. 15, which the NDP is basing its argument on has been repealed by C.I. 75 – despite the fact that he was yet to read the C.I. 75 –, be believes the current law would only be an update of the previous one.

He said the EC did not act “reasonably” when it refused to allow the NDP the opportunity to correct mistakes on the party’s form.

But Principal Public Relations Officer at the EC, Sylvia Annor said as at 6 pm Friday the party’s petition protesting their disqualification had not come to her attention.

She said although the EC has ended its nominations, “if there is another development, that would be for the Commission to delve into the matter and decide on what to do”.