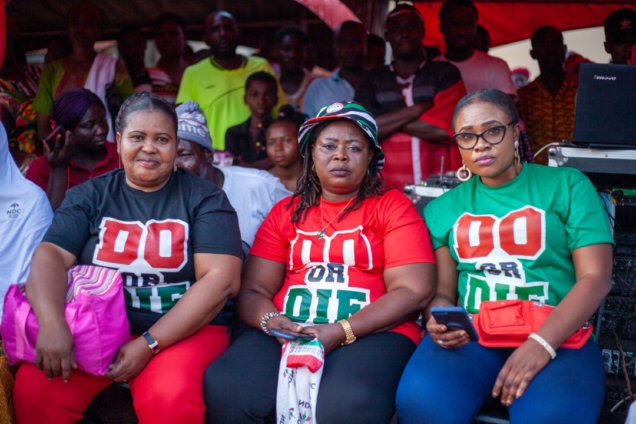 Former President Mahama’s ‘Do or die’ expression is gradually catching on with the party grassroots.

Though criticised by some as a violent-induced statement,National Democratic Congress (NDC) supporters in the Ashanti Region have accepted it, communicating it through T-shirt inscriptions.

The party says the statement will be at the core of campaigning to regain power in the next election.

“What the party leader said has been endorsed by me, the chairman. It’s not about being violent but being vigilant to ensure no one cheats us”, the Chairman of the party, Samuel Ofosu Ampofo, said.

The Party Chair said at the Frante Chief’s Palace as he joined the former President on his first day of the Thank You Tour to the Ashanti Region.

Eliasu Mustafa alias Kruka has served the party for over a decade, rising to become Ejura Brigade branch organiser.

He said he is yet to get over the 2020 election defeat.

“The NDC didn’t lose the elections. We all know the revelations when the case was sent to court,” he said.

Eliasu has travelled from Ejura to the small town of Frante to listen to the former President’s “speech of hope”, as he describes it.

He has added an embroidery that reads “Do or Die’ in support of the statement, catching on like wildfire.

“‘Do or Die’ has nothing to do with violence. On the contrary, I will talk to the youth to work hard and ensure things are well done at the collation centres”, explains how he intends to help the party win the next election.

At the rally grounds, some party members danced to their campaign songs blazing from the public address system while waiting for their leader.

Some are spotting “do or die” shirts.

“We are saying we will not sit for the NPP to cheat us as they did in 2020. We will open our eyes and ensure things are done”, Vida Asamoah, a staunch believer in the ‘Do or Die’ statement explaining how it will be implemented locally.

The statement was endorsed at the Frante palace, where the former President paid a courtesy call on the traditional authority.

“The former president was only telling his people to be vigilant. And all persons who are assigned roles should execute them to the best of their abilities. There isn’t anything wrong with this”, he said.

He added, “I am very happy that he has realised the court can’t guarantee electoral success. The party must ensure they are not cheated”, he said.

Meanwhile, the NDC says the statement will form the crust of the party’s quest to win back power in the 2024 election.

Different interpretations continue to be given to the “Do or Die” statement, but the NDC sounds resolute in support.