Donald Trump has said he would send home all Syrian refugees the US accepts, if he becomes president.

The billionaire, who is the current frontrunner in the Republican race for the White House, told a New Hampshire rally: "If I win, they're going back."

It marks a reversal in policy – earlier this month he told Fox News the US should take in more refugees.

A migrant crisis has gripped parts of Europe and the US has pledged to take 10,000 refugees from Syria next year.

Half a million people have crossed the Mediterranean into Europe in 2015, with the largest number from Syria, where 250,000 people have been killed in a civil war.

On Wednesday night, Mr Trump told an audience at Keene High School: "I hear we want to take in 200,000 Syrians. And they could be – listen, they could be Isis [Islamic State]."

Describing them as a "200,000-man army", he later added: "I'm putting the people on notice that are coming here from Syria as part of this mass migration, that if I win, if I win, they're going back." 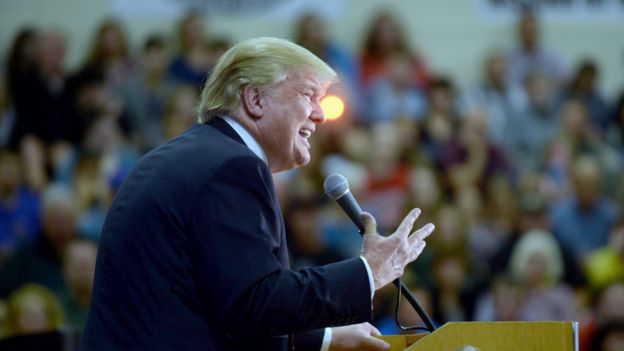 Trump leads the polls in New Hampshire, where he spoke at a school

Mr Trump has made immigration a central plank of his election campaign, pledging to build a wall on the southern border.

He was harshly criticised after saying undocumented Mexican immigrants were "bringing drugs, they're bringing crime, they're rapists".

His latest comments about sending Syrians home are more in line with his hardline immigration policy, although at odds with what he said earlier this month.

Asked whether he thought some of the migrants travelling into Europe should be allowed in the US, the business mogul said: "I hate the concept of it, but on a humanitarian basis, with what's happening, you have to." 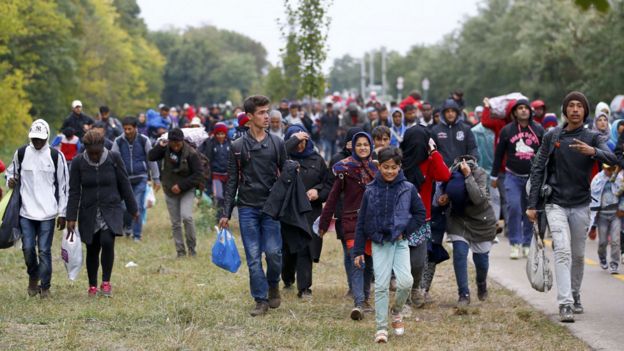 Many migrants have walked long distances to reach Austria and Germany

The US has allowed 1,500 Syrians to re-settle since the start of the conflict four years ago.

A number of Democrats, including Hillary Clinton, have urged the US to increase the number of Syrians from 10,000 to 65,000.