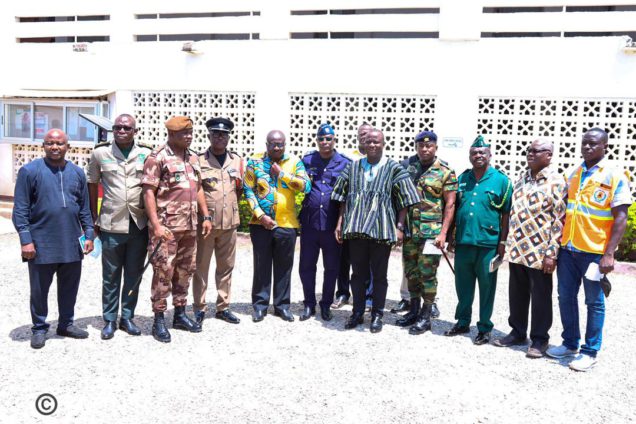 He said it will be better to nib the situation in the bud while they still can, so it does not metamorphose into a national challenge.

The Minister said this at an extraordinary meeting with the Upper West Regional Security Council in Wa on Thursday, 7th October, 2021.

The Minister indicated that the time has come for REGSEC to have full control over the operation of the mining sector in the region.

He added “I am confident that with the kind of leadership of the Regional Minister and the kind of professionalism and commitment exhibited by you, we will work to safeguard the region and our country.”

On Forestry, Mr Jinapor reiterated that the harvesting and exportation of rosewood is outrightly banned. Stressing that any wood species harvested will require a direct permit from him.

Touching on Public Lands and related issues, The Minister said “we need to have mechanisms for protecting public lands.”

He maintained that, the sale and encroachment of public lands should be a thing of the past, while thanking the members of REGSEC for their efforts in assisting government to protect the Natural Resources of the country.

The Security Heads on their part, collectively agreed to up their game in combating illegalities in the Natural Resources sector, particularly deforestation and illegal mining.

DISCLAIMER: The Views, Comments, Opinions, Contributions and Statements made by Readers and Contributors on this platform do not necessarily represent the views or policy of Multimedia Group Limited.
Tags:
Illegal mining
REGSEC
Rosewood
Samuel Jinapor
Upper West Region