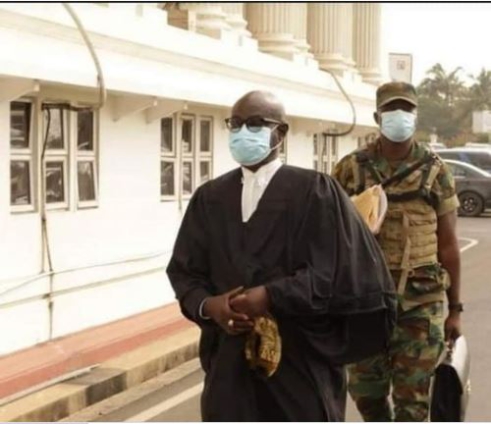 A former Communications Minister in the Mahama government has condemned the Chief of Defense of Staff (CDS) for allowing military officers to escort lawyers to court.

Dr Edward Omane Boamah in a Facebook post on Friday, condemned the act, saying Lt. Gen. Obed Akwa has “desecrated” the military profession by the act.

The former Minister’s comment comes after a viral photo of a military officer carrying the bag of a lawyer of the governing New Patriotic Party (NPP) in the election petition on Thursday.

Reacting to the viral photo, Dr Omane Boamah stated that “as a former civilian employee of the Ministry of Defence, I know the military is unhappy when such abuses drag their names into opprobrium.

“Soldiers ‘abandoned all forms of normal life’ once you entered the Square. And so we cherish you all. Let this reflect in your stewardship as the fine soldier, calm and decent person that you are,” he added.