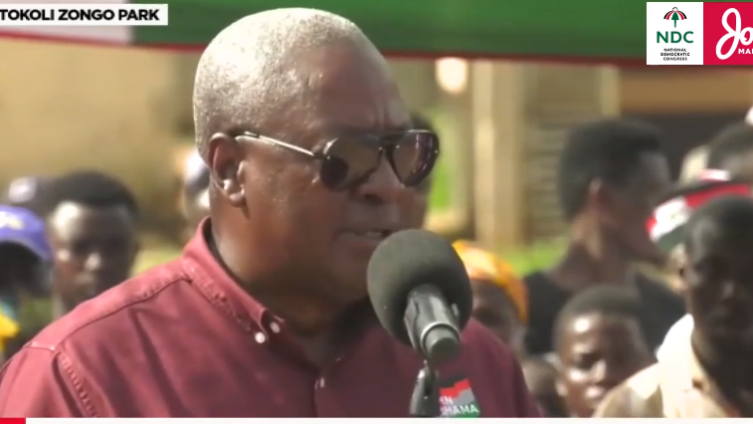 Presidential Candidate of the National Democratic Congress (NDC) on Friday, cautioned Party supporters and sympathizers against voting skirt and blouse in the December 7 polls.

Mr. John Dramani Mahama appealed to Party supporters and sympathizers to vote number two on both the Presidential and Parliamentary ballot papers for him as President and all NDC Parliamentary Candidates.

He made the appeal on day-one of the resumption of his Ashanti Regional Campaign Tour at a durbar of the chiefs and people of New Edubiase.

Mr. Mahama explained that when given the mandate by Ghanaians, he would need the support of the Party’s Members of Parliament to execute his agenda for the nation.

He urged Ghanaians to examine their living standards over the past four years and cast their votes wisely on December 7.

Adding that if Ghanaians examine their living standards well before casting their votes on December 7, God willing he would be victorious.

He appealed to Ghanaians to vote the NDC back to power to continue with its good works.

Mr. Mahama assured the chiefs and people of New Edubiase and Adansi Dampoaseman that his next administration would continue all the projects he started in the area during his first term.

Some of the projects include the E-block, New Edubiase Sports Stadium, the New Edubiase – Tonkwase road, and rural electrification, which had been abandoned by the current government.

With regards to farmers, he said his next administration would supply free fertilizers to cocoa farmers, as part of efforts to boost cocoa production in the country.

Mr. Mahama said his next administration would maintain and improve upon the free senior school programme, adding that the double-track system would be eliminated within one year.

Nana Okofo Sobing-Kan, Adansi Dompoasemanhene, appealed to Ghanaians, especially politicians and their supporters to ensure a violent free election on December 7, stating that “Ghana is the only country we have”.

It would be recalled that on Thursday, November 12, Mr. Mahama had to suspend his six-day campaign tour of the Ashanti following the demise of former President Jerry John Rawlings, the founder of the NDC.