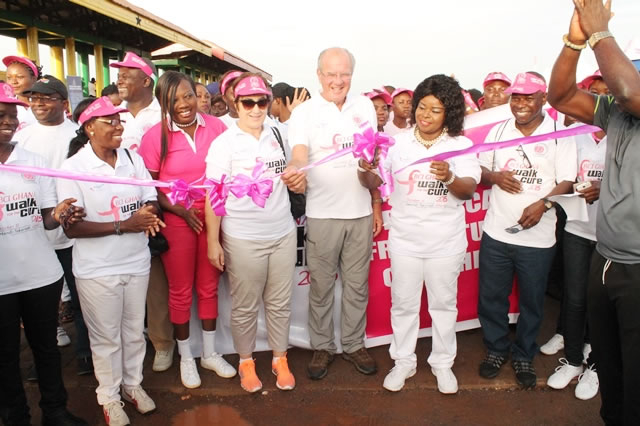 President of Breast Care International, Dr. Beatrice Wiafe Addai is urging the entire nation to join hands in the fight against breast cancer, one of the leading killer diseases among women in the world.

“The way the disease is fast spreading, it is about time to join hands to fight it. The fight against breast cancer is a collective responsibility. We don’t want our children and grandchildren to be victims of breast cancer. We must fight for a breast cancer-free future,” she noted while addressing over 50,000 people who joined this year’s Walk for the Cure exercise at Sekondi-Takoradi in the Western Region on Saturday.

She told the gathering, especially, the women among them, moments after the walk exercise to seek for early treatment because “the disease is curable”.

Dr. Addai nonetheless, urged both sexes not to engage in certain practices that will increase the risk of contracting the deadly disease.

For instance, she cautioned women against excessive intake of alcohol while urging the youth to stay away from smoking cigarette.

“To our youth, especially, those in the senior high schools, I am entreating you to immediately put a stop to cigarette smoking because it is dangerous to your health.”

“We are working hard for you to come and see a better future.”

She also advised the gathering who were mostly senior high school students to regularly exercise their bodies to lessen the chances of contracting the disease.

Last Saturday’s BCI Walk for the Cure at Sekondi-Takoradi was the fifth in the over 15-years awareness raising campaign being championed by Dr. Wiafe Addai who is also the Chief Executive Officer (CEO) of Peace and Love Hospital.

The event which took off at the Takoradi Jubilee Park saw participants walk through some principal streets in the twin city to raise awareness about the killer disease mostly among women before ending at the Essipong Sports Stadium.

Over 30,000 second cycle students joined the walk exercise dubbed “Fighting for a Breast Cancer – Free Future for our children and grandchildren”.

Free breast screening was organized for women who participated in the event.