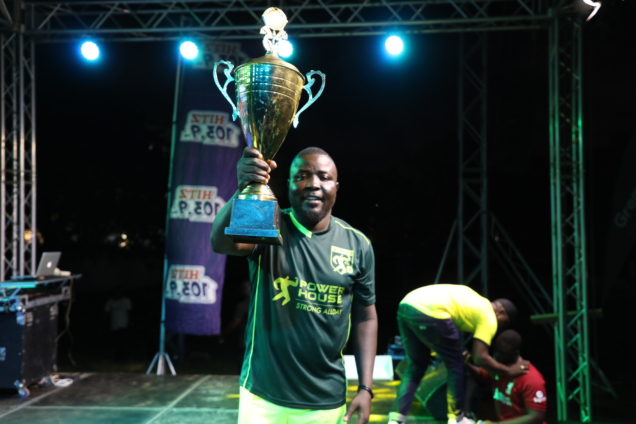 After several months of intensive training and bragging, Dr Pounds and the Dwɛtɛɛ FC won the enviable 5-aside tournament for the second time in a row, beating Merqury Quaye’s Turn Up FC.

The tournament took place at the Aviation Social Centre on Saturday at the Hitz FM Rep Ur Jersey event.

The reigning champions, coached by ex-Black Stars player Emmanuel Agyemang Badu, steered the group of five to victory in a competitive final match against Merqury Quaye’s Turn Up FC.

The 2018 champions, Turn Up FC, succeeded in claiming the title after beating KMJ’s Classic FC [now Royal Babies FC] in the aforementioned year’s final, but failed to retain the trophy against Dwɛtɛɛ FC in the 2022 edition of the tournament.

Be that as it may, Merqury Quaye’s Turn Up FC is yet to beat Dr Pounds’ Dwɛtɛɛ FC in a final match. In 2019, the Turn Up FC unwillingly passed the torch to Dwetee FC after suffering a staggering defeat in a clash with the star-studded Dr Pounds-led team.

In 2022, Dr Pounds, although labelled “just a currency in my pocket” by Merqury Quaye due to the Pounds moniker, the captain of Dwɛtɛɛ FC and his team meandered their way out of the Turn Up Army General’s pocket to be crowned champions.

In a post-final match interview with the captain of the Turn Up FC, Merqury Quaye, he attributed his loss to Dr Pounds’ alleged bribery and corruption with the officials of the game.

In his last words, the disheartened Merqury Quaye told the interviewer to “get out of his face.”

Meanwhile, as part of celebrating his long-awaited victory, Dr Pounds pledged that he will not be going to work on Monday, even though he has not been officially cleared off-duty by the management of Hitz FM.

Dr Pounds, with no authority whatsoever, went on to declare Monday, 30th May 2022 a holiday for the workers of The Multimedia Group.

Following his victory, social media, TV and radio shall know no peace, since “bragging rights” are firmly etched on the enviable trophy —because Dr Pounds can be annoyingly exciting when it comes to bragging.