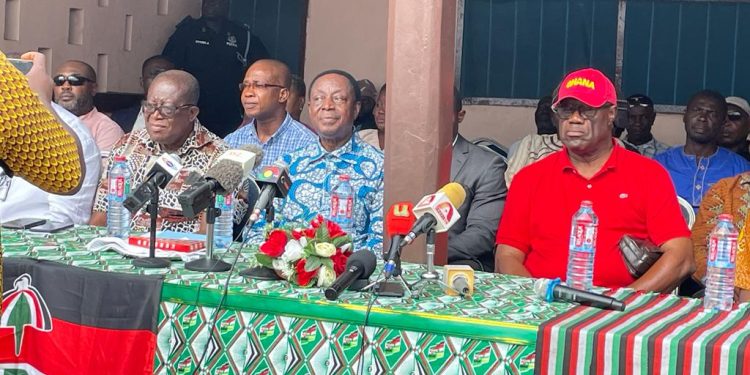 A leading member of the National Democratic Congress (NDC), Dr Kwabena Duffuor, has launched a micro-business initiative to empower party activists at the constituency level.

The project, dubbed NDC ahotɔ project, is targeted at the grassroots of the NDC in all 275 constituencies to enable them to become self-employed and economically independent.

Under the initiative, each constituency will receive accessories, logistics and equipment to run on a rental basis to generate funds for the party in the constituency.

At the launch of phase one of the project in the Ashaiman constituency, Dr Duffuor also presented 100 plastic chairs, four sets of canopies and a set of public address systems to the constituency executives, which will be rented out for social events to raise funds to support party activities at the various branches.

At the event last Thursday, Dr Duffuor, who is a former Minister of Finance, explained that the project was targeted at creating a sustainable revenue base for the party in all 275 constituencies in the country.

He said the project was as a result of an outcome of his stakeholder engagements with the rank and file of the NDC and his quest to bring a new approach to politics.

He noted that without a well-resourced base, the party could not properly re-organise its machinery and effectively restrategise.

Dr Duffuor, who is also a former Governor of the Bank of Ghana, advised the constituency executives to put in place measures to effectively utilise the resources given them as it would contribute to the generation of resources to tackle financial challenges at the constituency level and support welfare needs of the party members.

That, he said, would boost the NDC’s quest to recapture power in 2024.

The Chairman of the NDC Business Development Committee, Dr Ekwow Spio-Garbrah, commended Dr Duffuor for the initiative, stressing that it would help change the perception that the party was anti-business.

He said the ahotɔ project fitted into the objective of the Business Development Committee of the NDC.

“The committee’s objective is very similar to what Dr Duffuor is doing, which is what we can do in the NDC to change the image of NDC from what some people think is not a business-friendly party to one that is more business-friendly,” he said.

He encouraged other leading members of the NDC with similar ideas to get on board to make the grass roots resourceful.

The Ashaiman Constituency Chairman of the NDC, Mr Anthony Afenyo, expressed appreciation to Dr Duffuor for embracing the idea when the 34 constituency chairpersons, led by him (Mr Afenyo), called on him and put forward the proposal.

He said the strength of the party lay with the branch and constituency executives who over the years had worked with little resources but were self-motivated.
He said given the needed logistics, the constituency executive in the region were resolved to rally the NDC to secure more seats in the 2024 general election.