A man has been arrested following a shooting on a tram in the Dutch city of Utrecht which left three people dead, police say.

Five others were injured in the incident, and authorities say the attacker's motive remains unclear.

Gokmen Tanis, a 37-year-old Turkish man, was detained several hours after the attack. It is not yet clear where he was arrested.

The incident sparked a city-wide manhunt and the closure of schools.

What happened on Monday?

At about 10:45 local time (09:45 GMT), police were called to reports of a shooting on board one of the city's trams at the 24 Oktoberplein junction.

Several of the injured are in a critical condition.

Another witness told Dutch public broadcaster NOS that he had helped an injured woman when the tram came to an emergency stop.

"I looked behind me and saw someone lying there behind the tram," he said. "People got out of their cars… and they started to lift her up.

"I helped to pull her out and then I saw a gunman run towards us, with his gun raised," he said. "I heard people yell 'Shooter! Shooter!' and I started to run." 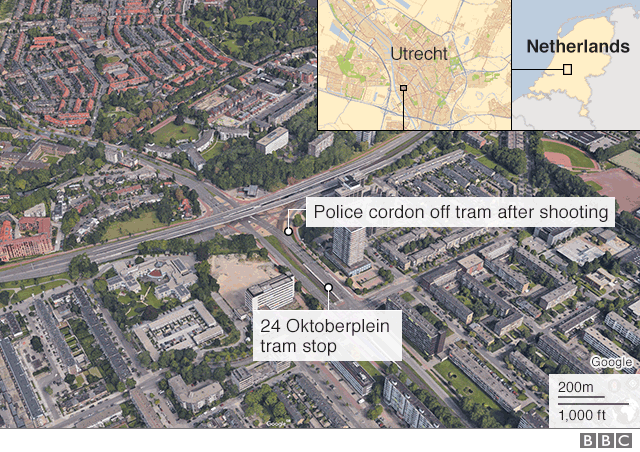 The gunman then fled the scene, leading to the manhunt which lasted for much of Monday.

Schools were closed and security was increased at airports and mosques while counter-terrorism police worked to locate the suspect.

A photograph of him was posted on social media by police, who warned people against approaching him.

A number of raids were reportedly carried out and counter-terrorism officers were pictured surrounding a building and patrolling the streets near to where the attack happened.

Police said the shooting appeared to be a terrorist incident but, at a press conference on Monday evening, a prosecutor said it could have been motivated by "family reasons".

Mr Tanis was known to Dutch police, the prosecutor added.

Jihadist groups, including those aligned with the Islamic State (IS) group, have long operated in the region.

"He was arrested because of his connections with [IS] but released later," the businessman told the BBC. 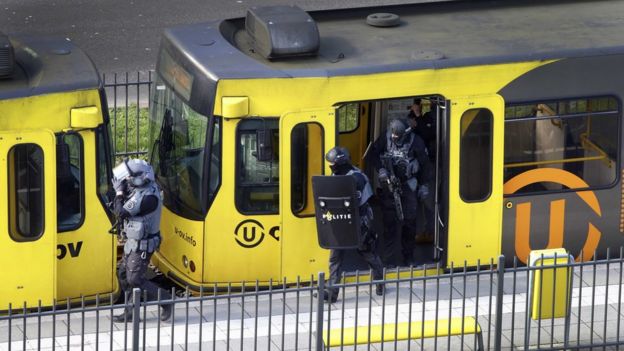 What's the reaction been?

Prime Minister Mark Rutte said the country had been "jolted by an attack", which he described as "deeply disturbing".

"There are many questions and rumours," he said. "It is unclear what the motives are behind this attack."

Leaders from around the world, including French President Emmanuel Macron and Spanish Prime Minister Pedro Sánchez, offered their condolences.

Meanwhile, the threat level in Utrecht has been reduced following the arrest. It was earlier raised to its highest point and paramilitary police were posted to airports and mosques. 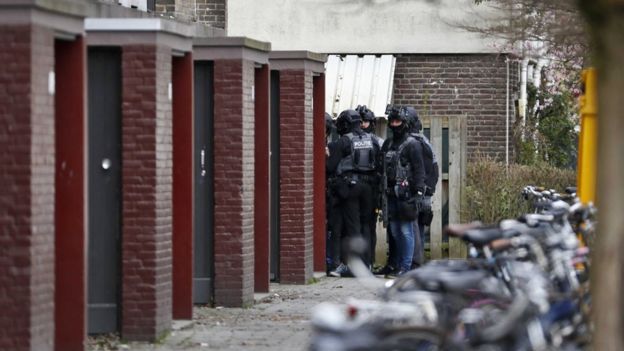 Utrecht University closed all its buildings and trains were not allowed to run into the city's central station. Some public transport services have now reopened.

Utrecht, the Netherlands' fourth largest city, has a population of about 340,000.

Crime levels are low and gun killings are rare, which is the case for much of the country.