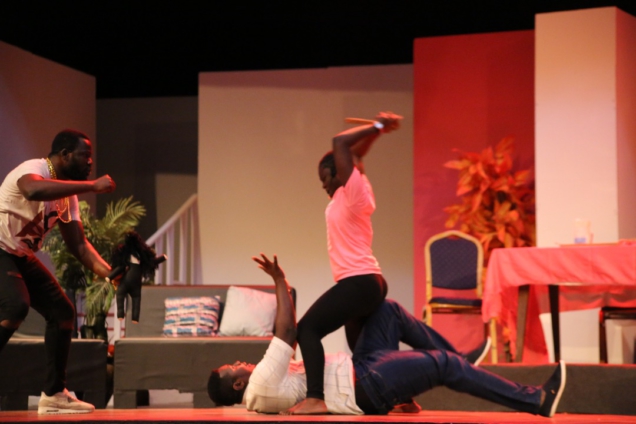 That fateful Saturday saw some Ghanaians troop into the National Theatre to watch the first in-person play since the coronavirus pandemic struck – finally a return of what they love, something normal.

Even with social distancing in place, the theatre was filled; at least to the needed capacity. Hand sanitisers were distributed to ensure the safety of Ghanaians present.

The play welcoming these lovers of art was ‘Devil’s Wife’; a play that tells the story of a young girl fearful of marriage because of past tragedies and a young pastor with so much faith.

Despite the love people have for Roverman and Uncle Ebo’s plays, Ghanaians are blunt in their reviews and thus the production house could not count just on the love but to bring their A-game. And they did.

At the opening, the audience is introduced to an overly concerned mother who sees everything as a taboo. Literally everything!!! Use a phone when someone is talking to you, You’ll die. Carry a mortar without a coin in it, the result is death. Use a phone at the dining table, death.

But for a mother who has seen her daughter lose three husbands during their respective wedding nights, you might think her weirdness with taboos is justified – just a little bit. A loving father who does not joke with his faith, however, not strong enough in his faith to accept a marriage for his daughter after her past experiences, is also introduced.

This is followed by a laughing Zoe and Rev. Kwaku Kom – their chemistry is so off the charts one might need to look away when they are being emotional. But the audience is quickly sucked in when the Devil haunting Zoe returns, leaving her to nearly kill her new love interest.

After that encounter, one is left curious how he fits into the situation, haunting Zoe. So, two of the funniest characters, maids in Zoe’s house, sit to give the audience a run-through of all of Zoe’s past relationships and their tragic ends.

Telling someone about an event in the past can be an okay experience but it can be one of the most fulling experiences if done right – it all depends on the choice of storytelling. Theatre gives Uncle Ebo and his cast the chance to finesse the story with music, exaggerate not just with lines but expressions and still get the message across clearly.

If you are an adult and unmarried in Ghana, the pressure to get married is something you are not spared and neither is Rev Kwaku Krom who has to deal with his church’s pressure and that of his mother.

Although people expect him to tie the knot, no one is ready to accept his decision to choose who his heart yearns for – Zoe. This is simply because, she is alleged to have killed three husbands. Even Zoe, who spent the majority of her time being clueless about her feelings for him, spent time trying to convince him otherwise.

But Rev is not shaken and you learn he is quite impressive when packing on an argument about why marrying the girl everyone disproves is a good decision.

First and foremost, Ebo Whyte, if you have ever seen his plays before, knows how to draw people in with lines that are not just funny but relatable.

He shows in this play and many others that he keeps up with social media trends, with lines referencing the presidential jet scandal and other social issues that have made waves in the past months. The audiences were sucked into the story.

Aside from that, having music like Yeeko, Second Sermon, Running to You, Why, Say Cheese, He is Able, Memories, [all songs that have made an impact in the society], among others seemed like a calculated plan to have people not only enjoy the play more but sing along.

However, for some audience who for the past year missed these experiences, dancing along to the music was the better option. Despite the fact that people have to be seated in the auditorium, some audience simply could not control themselves.

All in all, Ebo Whyte told a story that places people’s fears right in front of them.

One is made to question if they are like Zoe and her father who both swear to have great faith in the Almighty and yet cannot trust Him enough to deal with their issues for them.

Or they may ask themselves if they are like her mother who also claims to be Christian yet chooses other avenues when the societal pressure to be a mother weighed heavy on her.

Rev Kwaku Kom, perhaps because he is a pastor, is Ebo Whyte’s avenue to teaching people to have the ultimate faith that trumps everything else.

One is challenged to take a seat back and reassess their faith but also question whether they are part of the section of the society that pressures someone about something.

You also question your ability to withstand the trolls, backlash, insults, just like what Zoe, Rev Kwaku Kom and her father Mr Bedu were thrust into following the pastor’s decision to marry the woman of his dreams.

All this storytelling that had the audience at the edge of their seats, however, will not have been possible if the cast had not been perfectly cast.

But perfectly cast aside, one would have to engulf themselves in their role to convince him/herself of what they are doing, saying and how they are acting. Roverman did not miss.

When the audiences begin to repeat lines of the cast with them, you should anticipate a good show anytime an actor is on stage because you know the dialogue and the acting is a hit.

Ebo Whyte and his team deserve all the applause they get from this play and all others they have created in the past.

In a country where sponsorships for such great works are hard to come by, it is not only endearing but impressive that Roverman is doing something that barely a few can consistently do because of financial constraints.

However, after years of entertaining people, it is saddening that corporate Ghana and investors are not sponsoring these shows as much as they should.

The play was great but having a huge finance base could help Roverman branch in many other areas especially when it comes to creating different set designs in one show.

Most importantly, these sponsorships can help make the show affordable for some Ghanaians. Spending GHC80 on this play is worth every penny and so much more especially for the market, targeted. But not every Ghanaian can afford it. For some, they may not be the target audience but they still want the experience.

The lack of investment has failed the entertainment industry in many ways and one can only hope that the like of Roverman Production does not give up entertaining Ghanaians because of it.