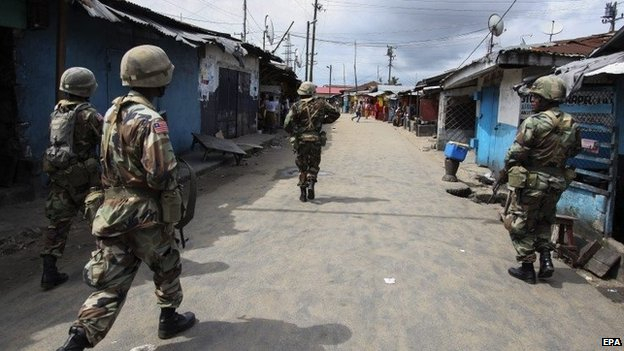 Liberia has imposed a night-time curfew and has quarantined a slum in the capital Monrovia in a bid to halt the deadly Ebola outbreak.

She said all movement would be blocked in and out of the West Point slum.

He said the drug was given to one Nigerian and two Liberian doctors who had caught Ebola while helping to save the lives of other victims of the virus.

The drug was first given earlier this month to two US aid workers, who were flown home for treatment from Liberia.

They are also reportedly recovering, but a 75-year-old Spanish priest who contracted Ebola in Liberia died in Spain last week despite being given the drug.

Ebola has no known cure but the World Health Organization (WHO) has ruled that untested drugs can be used in light of the scale of outbreak in West Africa.

Since the beginning of the year, 1,229 people have died of the virus.

It is transmitted by direct contact with the body fluids of an infected person.

Initial flu-like symptoms can lead to external haemorrhaging from areas such as eyes and gums, and internal bleeding which can cause organ failure.

The outbreak began in Guinea and has since spread to Liberia, Sierra Leone and Nigeria.