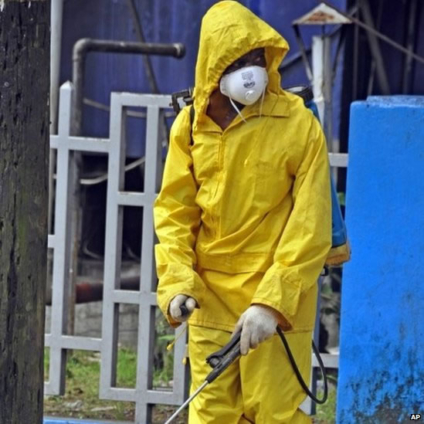 The number of deaths from the Ebola outbreak in West Africa has climbed to 1,229, the World Health Organization said Tuesday, but it cited "encouraging signs" from Nigeria and Guinea that positive action can rein in the deadly disease.

The death toll increased between August 14 and 16, as 113 new cases were reported, raising the total number of cases this year to 2,240, the world health body said.

The information came from Guinea, Liberia, Nigeria and Sierra Leone — the four West African countries hit by the deadly virus.

Despite the rising death toll, the WHO said that there were "some encouraging signs" in Nigeria and Guinea.

The situation in Lagos, Nigeria, where the first case was detected in July, "looks reassuring," it said.

"At present, the city's 12 confirmed cases are all part of a single chain of transmission. Those infected by the initial case include medical staff involved in his treatment, a patient in the same hospital, and a protocol officer in very close contact with the patient," it said.

No one on the same flight as the man who carried the infection into the country on July 20 was infected, despite him vomiting frequently on the flight and on arrival, it said. The man died July 25 and the 21-day incubation period has now passed, the WHO said.

Intensive efforts to track those at risk have not turned up any new cases outside the 12 identified.

One of those 12 has made a full recovery, the WHO said, which "counters the widespread perception that infection with the Ebola virus is invariably a death sentence." Evidence suggests early detection and therapy can help people survive, it said.

"The intensity of the search and monitoring effort raises cautious optimism that further spread of the virus in Nigeria can be stopped. The search for additional cases continues, as does the current high level of vigilance."

In Guinea, the situation is "is less alarming" than in Liberia and Sierra Leone, the WHO said, thanks to higher awareness and innovative efforts to contain the spread of the virus.

Community leaders have persuaded 26 villages that were resistant to outside help to cooperate, it said. As a result there has been a surge in reported cases — but these are cases that were previously concealed, so they should not be seen as surge in infections.

But despite the positive signs, the WHO warned that the outbreak is not under control and that progress is fragile, with a real risk of another flare-up and the continued spread of the disease.

The WHO on Monday called on the affected countries to carry out exit screenings of travelers at international airports, seaports and major land crossings.

But it said it doesn't currently recommend travel restrictions and active screening of passengers on arrival in countries that don't have borders with the affected countries.