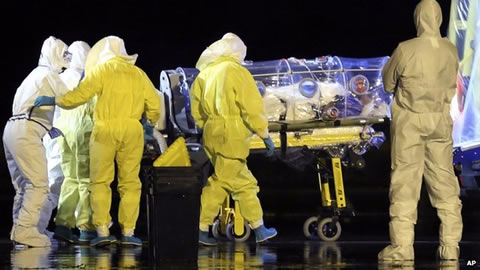 Spanish Health Minister Ana Mato has confirmed that a nurse who treated two victims of Ebola in Madrid has tested positive for the disease.

The nurse is said to be the first person in the current outbreak known to have contracted Ebola outside Africa.

The woman was part of the team that treated Spanish priests Manuel Garcia Viejo and Miguel Pajares, who both died of the virus, officials say.

Some 3,400 people have died in the outbreak – mostly in West Africa.

Meanwhile US President Barack Obama has said the White House is considering extra screening at US airports for people arriving from the worst-affected countries in West Africa.

He said the chances for an Ebola outbreak in the US were extremely low, but vowed to step up the pressure on larger countries to help with efforts to contain the disease.

It comes as the US tries to limit the spread from its first confirmed case, a Liberian in Dallas.

The Spanish nurse is in a stable condition, Ms Mato said. She started to feel ill last week when she was on holiday. 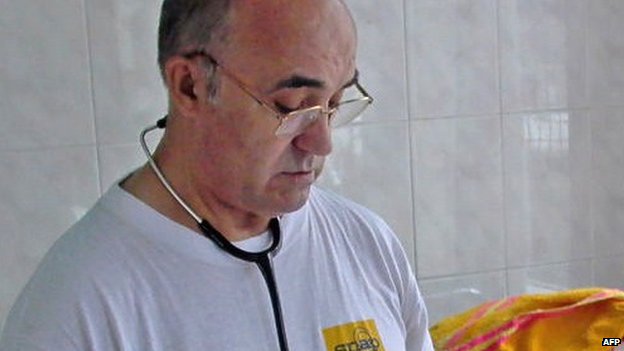 Manuel Garcia Viejo, seen in a file photo, was the second Spanish priest to be repatriated from Africa with Ebola.

The nurse was admitted to hospital in Alcorcon, near Madrid, on Monday morning with a high fever, she said.

"Both the health ministry and public health authorities are working together to give the best care to the patient and to guarantee the safety of all citizens," the minister told a news conference.

Miguel Pajares, 75, died in August after contracting the virus in Liberia.

Ebola spreads through contact with the bodily fluids of someone who has the virus and the only way to stop an outbreak is to isolate those who are infected.

There have been nearly 7,500 confirmed infections worldwide, with officials saying the figure is likely to be much higher in reality.

Guinea, Sierra Leone and Liberia have been hardest hit.

Thomas Duncan, the first person to be diagnosed with Ebola in the US, is being treated at a Dallas hospital in isolation. He caught the virus in his native Liberia.

He has been given Brincidofovir, a new experimental drug for treating Ebola which was developed in North Carolina.

Spread by body fluids, such as blood and saliva

Incubation period is two to 21 days

There is no proven vaccine or cure

Fruit bats, a delicacy for some West Africans, are considered to be virus's natural host