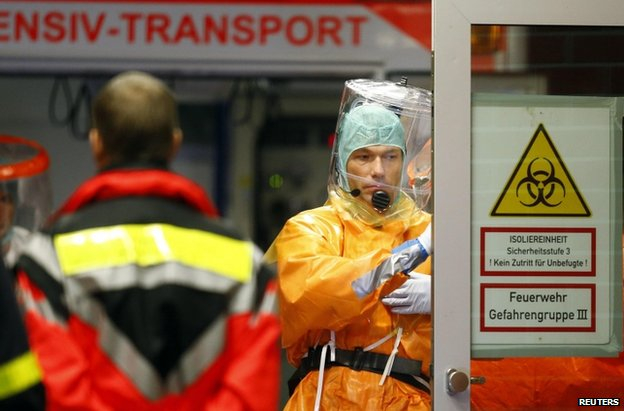 A hospital in the German city of Frankfurt-on-Main has taken in an Ebola patient after he was flown in during the night under tight security.

After arriving on a medical flight from West Africa, the man was brought to Frankfurt University Hospital where he was placed in an isolation ward.

He is a Ugandan doctor who worked with Ebola patients in Sierra Leone.

It is Germany's second case, with a man undergoing treatment in Hamburg after arriving from West Africa in August.

In West Africa more than 3,338 people have died in the world's worst outbreak of the virus.

The Frankfurt hospital said the patient's arrival had gone well.

"I am confident that the patient can get good treatment," Professor Rene Gottschalk told reporters.

Staff, he said, had been trained to handle Ebola patients, adding "but still, the adrenaline levels naturally go a little higher when a real patient is brought in."

Giving details of the sufferer, Hesse Minister of Social Affairs Stefan Gruettner said he had been working for an Italian aid organisation in Sierra Leone and had helped Ebola sufferers there before becoming infected himself.