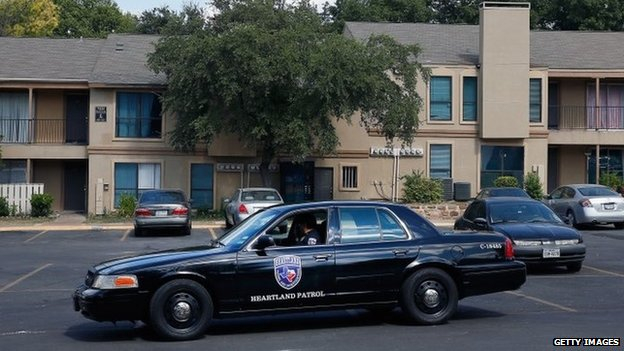 As many as 100 people in Texas are being checked for exposure to Ebola, health officials have said.

The list includes "potential or possible contacts" with Thomas Eric Duncan, a Liberian national diagnosed in Dallas on Tuesday, and "will drop".

Four of his relatives have been ordered to stay home while they are watched for signs of the disease, officials say.

Mr Duncan, believed to have caught the disease in Liberia, is in a serious condition in hospital.

He was the first case diagnosed on US soil.

In West Africa more than 3,338 have died in the world's worst outbreak of the virus.

Leading charity Save the Children has warned that Ebola was spreading at a "terrifying rate", with the number of new recorded cases doubling every few weeks.

UK Foreign Secretary Philip Hammond has called for urgent decisive action, including more financial aid, doctors and nurses, from the international community at a conference in London.

In Texas on Thursday, Department of State Health Services spokeswoman Carrie Williams described the department's list of 100 people as "a very wide net" of individuals "who have had even brief encounters with the patient or the patient's home".

"The number will drop as we focus in on those whose contact may represent a potential risk of infection," she said.

"We have tried and true protocols to protect the public and stop the spread of this disease," Dr Lakey said. "This order gives us the ability to monitor the situation in the most meticulous way."

His office said Mr Duncan's relatives had previously been instructed to stay at home, but a "strict public health control order is needed to ensure compliance".

Texas health officials have said that only 12-18 people are known to have had direct contact with Mr Duncan.

That includes five children who have been told to stay home from school.

The disease, which is not contagious until symptoms appear, is spread via close contact with bodily fluids.

Mr Duncan is thought to have contracted the virus in Liberia before he travelled to the US nearly two weeks ago to visit relatives.

He sought medical attention at Texas Health Presbyterian Hospital on 25 September. Then hospital officials said he had a low-grade fever and abdominal pain. Basic blood tests were performed, but he was not screened for the Ebola virus.

A nurse asked Mr Duncan if he had travelled from Africa, and he said he had, but that information was not fully communicated to the medical staff, an oversight the hospital now says it "regrets".

Mr Duncan was given antibiotics and a pain reliever and sent home, where his condition worsened, says his sister.

On 28 September, a friend of Mr Duncan's contacted the CDC for advice and was instructed to call the Texas Department of Health, which sent an ambulance.

The diagnosis was confirmed on 30 September.