Ebola: ‘Too slow’ WHO promises reforms

The World Health Organization (WHO) has set out plans for reform, admitting that it was too slow to respond to the deadly Ebola outbreak in West Africa.

At an emergency session in Geneva, director-general Margaret Chan said Ebola had taught the world and the WHO how they must act in the future.

She said the corner had been turned on infections but warned over complacency.

More than 8,500 people have died in the outbreak, the vast majority in Sierra Leone, Guinea and Liberia.

Dr Chan said: "This was West Africa's first experience with the virus and it delivered some horrific shocks and surprises.

The WHO says patient database figures give the best representation of the history of the epidemic. However, data for more recent weeks are sometimes less complete than in the regular situation reports

Dr Chan said that although disease outbreaks would continue to deliver shocks, "never again should the world be caught by surprise, unprepared".

The reforms announced included a "dedicated contingency fund to support rapid responses to outbreaks and emergencies".

There would also be improvements in international co-ordination and greater support for countries that needed to respond quickly to emergencies. 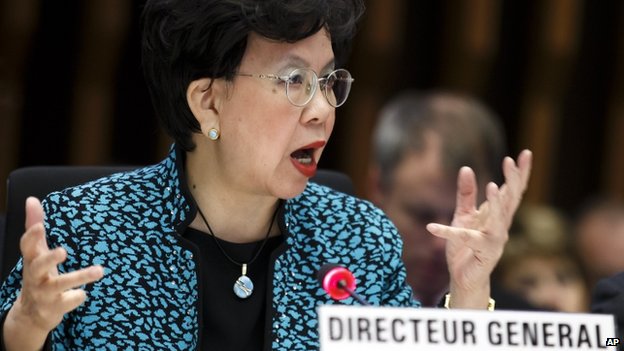 Dr Chan: "We must maintain the momentum and guard against complacency"

This would also require vaccines and drugs to be brought to the market more speedily.

Liberia announced on Friday that it was down to just five confirmed cases – there were 500 a week in September. Guinea and Sierra Leone have both also experienced falls in infection rates.

Dr Chan said the worst-case scenario had been avoided, but warned: "We must maintain the momentum and guard against complacency and donor fatigue."