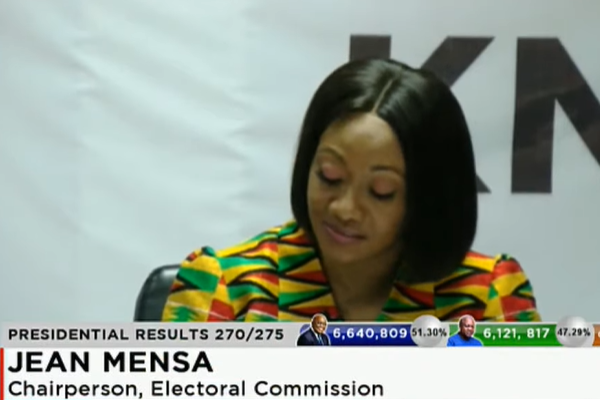 The Electoral Commission has declared President Akufo-Addo as the winner of the 2020 presidential election without the results from Techiman South Constituency.

According to Jean Mensa, her outfit is yet to receive the results from the constituency in the Bono East region because it is being contested.

Speaking at a press conference, she said after collating results nationally, her outfit believes result from the Techiman South polls will not have any effect on the general outcome.

“Currently, the results we have declared exclude that of the Techiman South which has a total voter population of 128,018.

“It is important to note that the difference between the total number of votes between the first and second candidates is 515,524 votes.”

“As a result, if we were to add the 128,018 full results to the results of the second candidate, it will not change the outcome of the election hence the declaration of the results,” Mrs Mensa added.

She explained that Akufo-Addo would obtain 50.8% of the votes if the EC were to add the results from Techiman South Constituency to that of the NDC.

Meanwhile, NDC candidate John Mahama would obtain 47.873% of the votes.

“On the basis of the foregoing election results and by the power vested in me as Chairperson of the Electoral Commission of Ghana, and the Returning Officer of the Presidential election, it is my duty and honor to declare Nana Addo Dankwa Akufo-Addo as President-Elect of the Republic of Ghana.”

What happened in Techiman South

In the early hours of Tuesday, the NDC in Techiman South had tried to prevent the EC officials from presenting the ballot boxes to the collation centre.

They had alleged that the incumbent government tried to rig the elections by mixing the ballot papers with fake ones.

Speaking on the issue, JoyNews’ correspondent Anass Sabit indicated that some ballot papers were torn into pieces in the midst of the clash.

Later in the day, another confusion erupted in the constituency left that two people injured.

The confusion is said to have erupted when supporters of the NDC prevented the presiding officer from declaring the NPP parliamentary candidate the winner.

JoyNews’ Correspondent, Anas Sabit said the NDC had earlier announced that the party has retained the seat, thus, it came as a surprise when the electoral officer said their opponent had won the election.

Addressing the media during an emergency presser, Bono East Regional Communications Officer of the NDC Kwadwo Adjei Dwomor accused the District EC officials of manipulating the results to favour the NPP candidate.

The party thus refused to accept the declaration adding the announcement made by the EC is invalid.

He called on the regional EC to take over operations from the district officers and recount the ballots to ensure the rightful winner is duly announced.