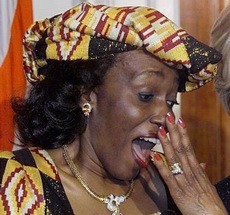 Former First Lady Nana Konadu Agyemang Rawlings has been disqualified by the Electoral Commission from contesting the 2012 presidential elections.

Her forms, reportedly, did not contain the requisite number of people from across the country to endorse them.

In other instances, those who endorsed did not sign them.

E.C officials will also not accept a situation where NDP leaders allegedly decided to sign on behalf of those from various regions who endorsed her forms but failed to append their signatures.

Three other smaller parties – the IPP, GFM and the YPP had the nomination forms for their presidential aspirants rejected because they were incomplete or had fatal errors.