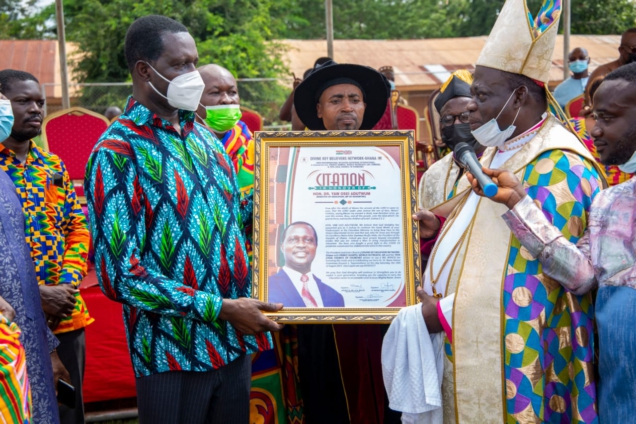 Minister for Education, Dr Yaw Osei Adutwum, the Asanthene Otumfuo Osei Tutu II, the Paramount Chief of Tepa, Nana Adusei Atwenewa Ampem I, and seventeen other people have been honoured at a special ceremony at Tepa in the Ashanti region on Saturday.

The award ceremony, which was in two categories, saw the Education Minister, Asantehene and the Tepamanhene being honoured for their support towards the development of education at Tepa and the country.

At the same time, the other awardees were also honoured for contributing to diverse ways towards the socio-economic development of Tepa and its surrounding communities.

Whereas Dr Adutwum and the Tepamanhene were present to receive their citations on their own, the Asantehene’s award was received by Barima Ogyeabour Amankwa Adunan I, Paramount Chief of Kuntanase who represented the Asantehene.

The other awardees were five politicians, and 12 clergies of diverse backgrounds for their role in the development of Tepa and the socio-economic development of Ghana were also presented with a plaque.

In attendance were the Director-General for National Disaster Management Organization, Eric Nana Agyemang Prempeh, the Asantehene Osei Tutu II, who was represented by Barima Ogyeabour Amankwa Adunan I, Paramount Chief of Kuntanase and Asamoah Boateng, Director-General, State Interest and Governance Authority (SIGA) and Francis Asenso-Boakye, the Minister of Works and Housing among others.

The Divine Key Believers Network-Ghana organised the annual award event in collaboration with Prince Hampel World Outreach (UK) and the Tepa Local Council of Churches to reward individuals who have distinguished themselves to the socio-economic development of the area and the rest of the country.

Dr Yaw Osei Adutwum, in his short address, expressed his profound gratitude to the Tepahene and other organizers of the event for the honour done him.

He commended the Asantehene for his lead role in the development of education in the Ashanti region and the country in general.

Also, he lauded the Tepahene for his vision to promote the development of education in his area and called on other chiefs to emulate this good initiative of complementing government efforts at transforming the country through education.

The Education Minister emphasised that the development of good education required the collective effort of various facets of the economy and therefore called on all to contribute their quota towards attaining such a feat.

He said, “although the government is doing everything possible to provide the needed resources towards the development of education if all stakeholders do not play their collective roles, it would be tough to get the right results”.

The citation, which was read and presented by Prof. Prince Hampel, President of Prince Hampel World Outreach (UK), read, “Dr Yaw Osei Adutwum, we believe that God Almighty has appointed you as a Joshua to continue the good works of your predecessors in the Education Ministry to bring a new face to Ghana’s Education Sector, and that was why he chose you through President Nana Akufo-Addo.

“Indeed, you have proven beyond reasonable doubt that indeed you are a man to bring transformation into the nation’s education”.

It continued, “You have also fought a good fight in the Covid-19 pandemic season and has stabilized education in the country”.

“The President and the entire board of Divine Key Believers Network-Ghana in collaboration with Prince Hampel World Outreach (UK), and the Tepa Local Council of Churches wish to say a big Ayekoo for honouring this invitation and celebrating our hero Nana Adusei Atwerewa Ampem I.”

Due to his hard work and the innovative initiatives he introduced into the education sector during the 1st term, the government had no option than to make him a substantive Education Minister during the second term to continue with the good works he started.

Notable among the initiative he introduced was the double-track system at the Senior High School level, which saw more than 400,000 other students also going to school instead of staying home due to lack of accommodation space in schools.

Again his dream of supporting the government to promote the development of Science, Technology, Engineering and mathematics (STEM) education, revamping the Technical, Vocational Education ad Training (TVET) are just a few of the good initiatives he was promoting to transform the nation’s socio-economic development.