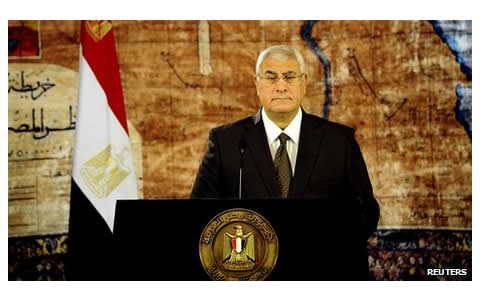 The US and the European Union have called on all sides in Egypt’s political crisis to end “a dangerous stalemate” after the interim government said foreign mediation had failed.

In a joint statement, they said the Egyptian government bore a special responsibility to begin this process.

The army-backed government says it will break up sit-ins in Cairo being held by supporters of ousted President Morsi.

Scores have died in unrest since Mohammed Morsi was ousted on 3 July.

Since then, diplomats from the US, EU, Qatar and the United Arab Emirates have all tried to bring Egypt’s political process back on track.

But on Wednesday the office of interim President Adly Mansour declared in a statement that the “phase of diplomatic efforts has ended today”.

“These efforts have not achieved the hoped-for results,” said the statement.

The presidency said it held the Muslim Brotherhood – which backs Mr Morsi – “completely responsible for the failure of these efforts”.

“While further violent confrontations have thus far been avoided, we remain concerned and troubled that government and opposition leaders have not yet found a way to break a dangerous stalemate and agree to implement tangible confidence building measures,” they said.

“The Egyptian government bears a special responsibility to begin this process to ensure the safety and welfare of its citizens,” the statement continued.

“This remains a very fragile situation, which holds not only the risk of more bloodshed and polarisation in Egypt, but also impedes the economic recovery which is so essential for Egypt’s successful transition.

“Now is not the time to assess blame, but to take steps that can help initiate a dialogue and move the transition forward.”

Any use of weapons against police would meet “utmost force and decisiveness,” he was quoted as saying.

Mr Morsi’s supporters outside the Rabaa al-Adawiya mosque in the suburb of Nasr City, and in Nahda Square, near the campus of Cairo University in Giza, have strengthened barricades in readiness for any action by security forces, witnesses say.

Interim authorities have repeatedly asked Brotherhood supporters to end the sit-ins in Cairo. Diplomats have voiced concerns about the possible use of force to break up the protests.

Violence has also been reported between Mr Morsi’s supporters and residents in the city of Alexandria.

Mr Morsi – Egypt’s first democratically elected president – is under arrest at an undisclosed location. Several other senior figures from the Muslim Brotherhood have also been detained.