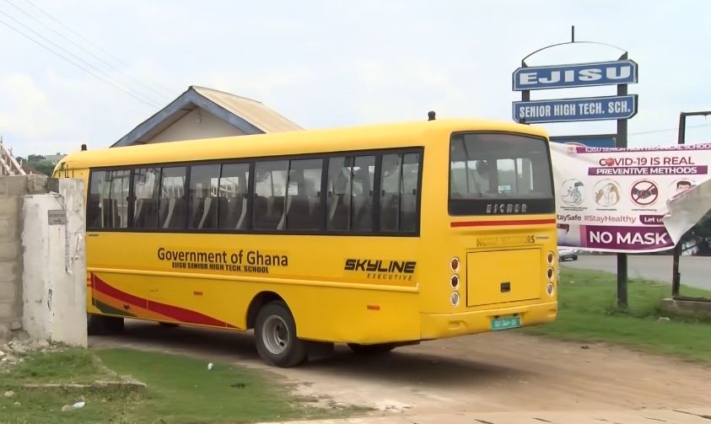 Emerging videos available to Luv News show Assistant Headmaster of Ejisu Secondary -Technical School who detained two students overnight in his office may have been abusing students prior to the latest incident.

Kofi Appiah had, on July 21, admitted to locking the students up for allegedly stealing an electric stabiliser.

One of the detainees attempted suicide as a result of being confined in his office for a night.

But following fresh evidence of maltreatment in which students are seen crawling on their knees by a road under his direction, some members of the community are beginning to express concern about the teacher’s behavior.

Nkosuohene of Ejisu, corroborates the new video which depicts some young men who identify themselves as students of the school crawling.

Nana Kofi Poku told Luv FM’s Erastus Asare Donkor that he nearly drove into the students at night on one occasion.

“When I reached the school, I saw some three things moving in the road so I thought they were sheep. I slowed down and increased my high lights and saw it was three boys,” he said.

Upon further interrogation, the students narrated that they had been caught eating at a non-prescribed time and were been punished by the assistant headmaster.

According to the Nkosuohene, he confronted Mr Appiah who admitted subjecting the students to such ordeal.

“I saw them eating and I said it’s not right for you to eat at this time. In fact, I told them that they should crawl and follow him,” the assistant headmaster is heard saying in an amateur video.

The chief also wants education authorities to investigate reports of some students scooping faeces with their bare hands on the orders of Mr Appiah because they defecated in the bush.