As it happened: EC’s failure to appear before Parliament causes stir 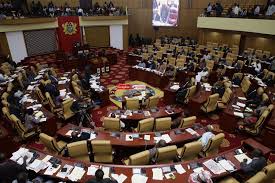 Contrary to expectation, the Electoral Commission (EC) did not appear before Parliament to deliver a brief on its plans and readiness ahead of the December polls.

The Comimission was supposed to be present alongside other outfits including; the National Commission for Civic Education (NCCE), Ministry of National Security and the National Media Commission (NMC).

However, after these other invited institutions made their presentations, the EC was still not in sight, a development that angered some members of the house who described it as contempt.

According to the Majority Leader Osei Kyei Mensah Bonsu, the EC Boss had other engagements outside Accra which is why she couldn’t come.

In response, the election organising body expressed its readiness to meet with Parliament on Saturday, November 7.

Keep this tab opened as myjoyonline.com brings you the latest on Ghana’s political scene with the general elections 31 days away.