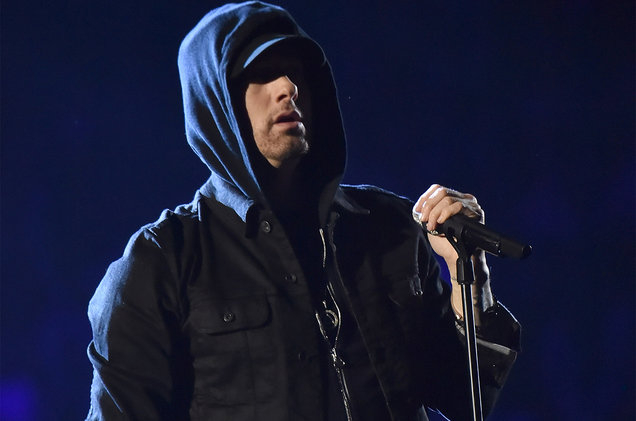 Eminem is drawing criticism from festival-goers who were frightened and upset over the rapper's use of realistic gunshot sound effects during his headlining performance at Bonnaroo Saturday night (June 9).

Many fans screamed and ducked as a series of loud blasts rang through the crowd during Eminem's performance of "Kill You," from his 2000 album, The Marshall Mathers LP. The nervous reaction arrives at a time when concert-goers are on edge following the deadly mass shooting at last year's Route 91 country music festival in Las Vegas.

Social media star Andrea Russett was one of many in attendance at the Manchester, Tenn., festival who was traumatized by the realistic gunshot sounds during Eminem's set.

"I hate to be the one to say it, but being someone who suffers from very mild PTSD, it was EXTREMELY irresponsible and distasteful to end songs w the shot gun sound effect," Russett tweeted. "I have grown up loving eminem and his music but i was extremely triggered to the point of tears."

She continued, "To hear a gun shot sound effect and see the entire crowd drop to the floor out of instinct is not funny, cute, or amusing. this is the sad reality that we are living. this is not funny or even something to be joked about."

Some fans came to Eminem's defense, noting that the hip-hop star has used the gunshot sound effects during past performances.

"Eminem has ended Kill You with the  gun shot effects for (at least) 6 years now and this is the first time someone ever complains," one Twitter user pointed out.

Eminem had not commented about the Bonnaroo incident at press time.