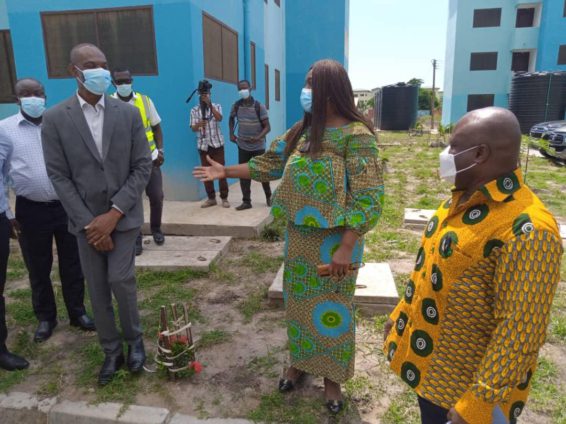 Mr Asante cited the Ocean Park Development site at Community Five, where the encroachers are making it difficult for construction work to begin with pockets of resistance against 48 Engineers Regiment personnel who have been tasked to demarcate the site and start the fence wall.

He stated this during a working visit by Mr Joseph Cudjoe, the Minister of Public Enterprises, to inspect some major housing projects TDC is undertaking in some communities within the Tema enclave.

Mr Asante, therefore, appealed to appropriate stakeholders to help convince the encroachers that there is the need for TDC to provide housing for Ghanaians. “So, because they occupied the place temporarily, the time has come for them to be relocated”.

He said TDC intended to construct 18 Four-Storey Buildings, made up of two-bedroom apartments at Ocean Park, which they would put on the market, and use part to relocate some households from other sites.

He said TDC is facing a similar challenge of encroachment at the Kaizer Face One project. “We have been able to bring down some of the houses but others are standing because the occupants had some leasing agreement with TDC.

“We are convincing them to move to the Kpone Affordable Housing Units, but they say it’s too far; we’ve offered adequate monetary compensation based on proper evaluation, yet some are refusing to go”.

Mr. Asante said dialogue is ongoing but if it failed the company may have no choice than to resort to legal redress of the matter; “Because the area has been declared a disaster zone, the buildings are worn out, the iron rods are sticking out and they are not supposed to be living in them”.

He said TDC would not only be able to increase the housing stock and bring in needed revenue to the country, but would also help solve the unemployment situation in Ghana by creating many jobs with the development of their numerous housing projects.

Mr. Cudjoe said, “What we see is an opportunity to grow TDC to generate jobs, we talk about unemployment but here we have a state-owned enterprise with capacity to expand, capacity to do more if the financial and technical constraints are solved”.

The Minister indicated that market for affordable housing units existed in Ghana, but the challenge was how to get the needed funding in such a way that TDC could produce the houses at affordable prices for buyers.

As part of the visit, the Minister and his entourage visited the Kpone Affordable Housing site, the NHMF Estates at Community 22, the Kaizer Flats, Community Four, the TDC flats at Community Three, and the Ocean Park.