Enimil Ashon: A taste of democracy in Germany for Akufo-Addo 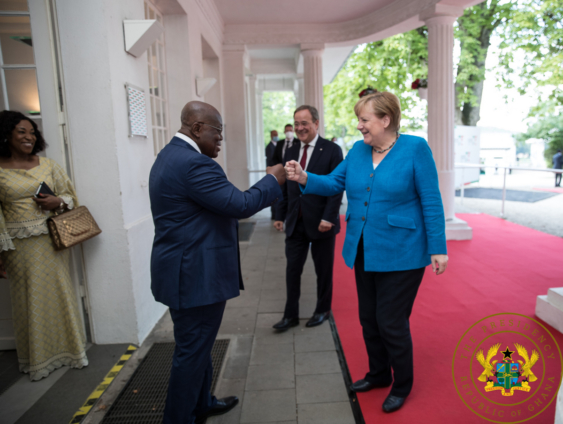 I have nothing but admiration for Akufo-Addo. To have received a bashing and not flinch as patriotic and concerned Ghanaians in Germany withstood him in the streets with chants of “Nana, Fix the Country so that we can return home”, I found that admirable.

At 77, he was a pillar of emotional strength as he displayed the equanimity and elegance demanded of a man occupying the highest and the most bashed office in the land. If something was going through his mind, it was hard to tell because his face was as impassive as death.

Back in bed that night, alone with his conscience and far away from the loving embrace of his “beloved” Rebecca, he must have done some introspection. For a man who swept to power with one million votes between him and the next contender, for the head of a regime that, in 2016, had so much goodwill, the events of the day in Germany were sobering, if not humbling.

In moments like this, it is tempting to gaze into the boiling cauldron, look out for the enemy within and see the long hand of the largest opposition party, but I dare advise that rather than listen to voices of boot lickers and eye-pleasing yes men who, if they are not blood relations, are greedy bootlickers with an eye for appointments and contracts, Nana should thank God that this upheaval has come in the first year of his second and final term, enough time to mend the broken net.

The German demo and the planned follow-ups slated for the major cities of America and Europe are the dammed waters of democracy bursting loose. They are voices of people trying to remind Nana Addo Dankwa Akufo Addo that he may not have another term, but he has a legacy to leave.

The demos are not anti-Akufo Addo or anti-NPP: they are anti-Ghanaian politicians. They are anti-Rawlings-Atta Mills-Mahama. Remember, Kume Preko was in a military regime against politicians in military uniform. They came with pretty faces, and olive oiled voices in 1966, 1972, 1979 and 1981 but only succeeded in entrenching greed, patrimonialism and patronage.

Nana’s legacy? I wrote just before Election 2020 that it will not be in infrastructure or Free SHS; not necessarily. Though everybody wants to see more and better roads, more and better-equipped hospitals and schools, etc., these are not necessarily the guarantees against mass anger; otherwise, John Mahama would not have lost by an unprecedented one million votes in 2016. Plus, no government in Ghana has fared better or worse in infrastructure than we are seeing under NPP

Ghanaians resent the idea that a clique of family or friends or inner-inner party power influencers are sitting somewhere in the Jubilee House directly moving Kings and Queens, Knights and Pawns across the chessboard.

(I hope someone was bold to show Akufo Addo the viral video of someone who said he was the President’s cousin. He was livid against the “inner-inner” power clique surrounding the President.)

Ghanaians don’t like it when they are slapped in the face. They find it hard to understand why the President is maintaining his current Health Minister in the face of proven sordid incompetence. As a people, we don’t want anybody, I repeat, anybody, to make us believe that we don’t matter, that our complaints are only ugly noises.

The people shouting Fix the Country are irked by a reminder of their feeling of helplessness when  Akufo Addo allowed an evil Chinese woman, Aisha Wan, to spit at Ghanaians in the face and board a plane back to China, free, with all her loot after masterminding the worst Galamsey impunity in Ghanaian history.

Any time Akufo Addo is tempted to heed the voices of the inner-inner yes-people from his tribe, his clan, his family and his party, he should remember that in four years, his popularity rating was slashed by 50%, from one million votes to 500,000. It was not Mahama the voters loved; it was Akufo Addo they were rejecting.

While at it, one of this column’s beloved critics, Dr Ken Nii Aryeetey, one-time medical officer at Ghana’s Fourth Republican Parliament, called this week to ask me why Ghanaians should tolerate the likes of Allotey Jacobs.

“If Kufuor had had a heart attack and died after he (Jacobs) lied in 2010 that the former President stole $5 million while in office and had babies with Iraqi/American Gizelle Yadzi, would there have been this chance in 2021 to ask for forgiveness?  And we tolerate him just because he sits on the ‘Kokrokoo’ panel on Peace FM on Wednesdays?” he demands.