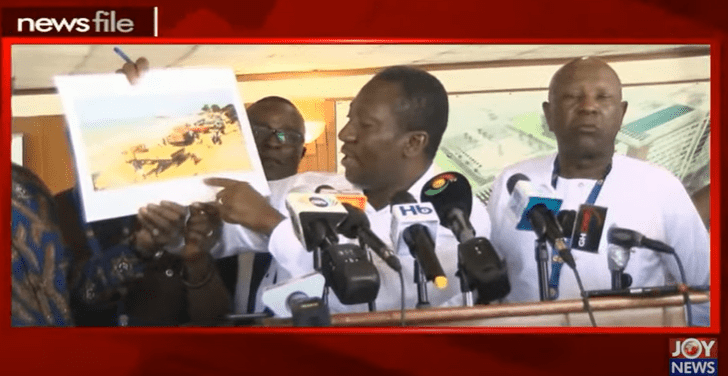 By NPP’s bad communication I am referring to what, for want of a better expression, is its often loose, unguarded talk.

The most recent examples are utterances by the party’s MPs, led by Afenyo Markin. It is un-Ghanaian to, in the wake of a tragedy, attempt to point out to the victims, even if it’s true, that the tragedy was self-inflicted, caused by their own, impliedly, foolish actions.

What was Afenyo Markin mightily trying to prove? At a time when people are grieving over the loss of everything they ever toiled to build, it is adding insult to grief to blame sand winning. We were not brought up to talk like this. It paints the NPP as a totally unfeeling party devoid of the milk of human empathy.

Another NPP MP called the press to show them a picture which he thought was Keta. Question is, even if it were Keta, what point was he trying to prove: that the people of Volta Region brought the tragedy on themselves?

After such an unpardonable goof, no number of press conferences announcing that Afenyo Markin is himself a Voltarian will assuage the hurt of the people.

I was actually half expecting the President to cut short his visit and return home. That would have been a loud statement to the world, even if unverbalized, that he so loves his countrymen that nothing else matters in the wake of the Volta cataclysm.

Is there such a shortage of counsellors in NPP that none of its elders has been able to advise the President to make it up to the chief of Aflao? What about the Council of State? We mustn’t give the  people the impression that Council of State members don’t deserve the title, “Honourable”.

Now a few words about the litany of excuses and accusations by the NDC and John Mahama. I have read the Daily Graphic’s November 12 reportage of the party’s press conference and I cannot help but conclude that there is method in this litany. I am fighting off a feeling that it is a charade by Mahama announcing to party delegates that “I didn’t lose 2020; my victory was stolen by EC; that, therefore, I deserve another chance in 2024.”

One, is it Mahama’s story that twice, between November 22 and 27, the party’s agents suddenly “discovered to their dismay”, extra ballot papers “concealed” at the offices of Innolink, and that on both occasions the illegal ballots were designated for Ashanti?

Two, if the extra papers discovered at Innolink were, in Asiedu Nketia’s own words, “filmed and destroyed at Old Fadama in the presence of officers from the police, National Investigation Bureau, Innolink, NDC party agents and the media, how did someone manage to snatch one million out of the lot under the very noses of these red-eyed vigilantes?

Three, Asiedu Nketia said “the party (had) reason to believe that some of the excess ballot papers were sent to the Ashanti Region” What reason? What evidence?

Four, how did the one million extra ballots find themselves in ballot boxes in Ashanti after the empty boxes had been held high on polling day and publicly certified empty by police, vigilant NDC party agents, local and international election observers?

Five, that not even in NDC strongholds like Asawase and New Edubiase did party agents discover the fraud?

Seven, is it reasonable that NDC and Mahama had such red-handed evidence and did not as much as whisper a word of it during all the many immediate post-election press conferences?

Remember, the party had started off with claims that it had won both the majority in Parliament and the presidential but had been cheated out of it by EC. In court, they said “no candidate had more than 50%”.

Dear reader, if my arguments above sound anti-NDC, please, forgive my love for country. Cast your minds back to the days immediately following the elections. Remember the burning of tyres, confrontations with the police, the shootings, beatings etc.

I am a citizen of Ghana. I don’t have to be NPP to fear civil war.

DISCLAIMER: The Views, Comments, Opinions, Contributions and Statements made by Readers and Contributors on this platform do not necessarily represent the views or policy of Multimedia Group Limited.
Tags:
Alexander Afenyo-Markin
Keta Tidal waves