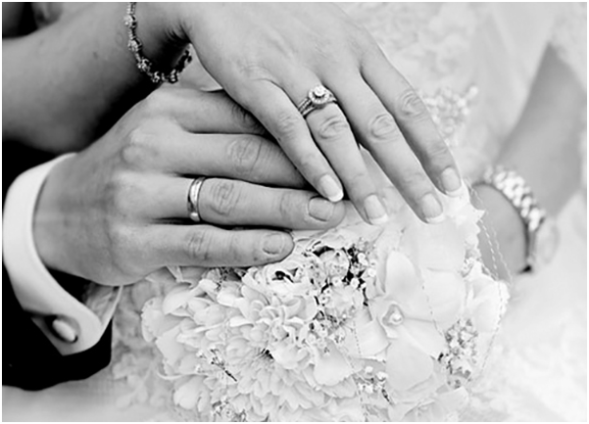 The holy men (and women) who decreed monogamy through Christian church weddings were actuated by good intentions. Holy matrimony forbids polygamy and the man brings in a second woman on pain of ex-communication by the church. Since everybody wants to be buried by the church in a church cemetery, this arrangement works nicely.

But as has been demonstrated in the case of the recently murdered Mfantsiman MP, the priests cannot be everywhere, and for many Christians, our thinking seems to be that where there is no priest, there is no God! The bearded old man above, however, has a way of showing up when we least expect.

And so, a few days after the MP’s death, a second woman in his life emerged. Unlike “Papa no”, this other lady was not just a concubine; she had also been wedded!

It is still not known who is “Papa no”. I am not interested in his name; my interest is to point out how unexpectedly God shows up to reveal that which we did when no-one was watching. More, it is a sad commentary on the morality of our leadership in Ghana that people who have, by virtue of the positions into which politics has thrust them, cannot keep their zips up.

“Nobody is an angel, but it is precisely because we know our weaknesses and foibles that many people would rather not deceive themselves into presenting themselves as paragons. My Latin antecedents warned, almost have a century ago, that “stulti est ce decipere” (“self deception is the mark of a fool”).

Pastor Mensa Otabil, in his first address to the First Parliament of the Fourth Republic, wondered why men suddenly get very promiscuous, adding on mistresses at the least opportunity they have to be away from their wedded wives, using state resources to put up these mistresses in expensive accommodation and buying them cars.

Meanwhile (and this is my own observation), many of these girls have no claim to being called ladies besides their easy availability and social media notoriety.

Why are people required to swear on a sacred symbolic objectof their religion – the Bible, the Cross and the Koran? Ultimately it is because there is supposed to be a correlation between church/mosque/shrine, religion and public morality.

Has it struck us how few (indeed, no) public office holders opt to swear on a symbolic object from the fetish shrine! They know that with the deity, the exposure, and the punishment, is instant.

This week, I called at a private printing press, intending to see a friend. I felt eyes following me everywhere. Apparently it was one of the few presses which have qualified to print ballot papers for the December 7 elections.

There are policemen everywhere. Unseen with the “naked eyes” are a dozen operatives of the dreaded National Security, keeping watch over the movements of the staff. Party agents are also around. Very vigilant: even when they sleep, one eye is open!

My friend sees all of this as a total waste of national resources. His recommendation is one public ceremony, with all the staff present, at which a fetish priest, preferably from the Akonedi Shrine, Eastern Region, Pekyi Otu, Central Region, Patangye, Western Region and Ekpelekpegyi, Volta Region plus thunder and lightning gods from the three northern regions, will dance himself into a frenzy and plant a fetish object at a corner of the press. It settles the matter. After that, we would not need a security presence and yet there will be no cheating.

Globally, developing countries lose up to $40 billion a year through corruption, stolen by highly religious men and women.

In his life, Nigeria’s Sani Abacha never missed the mosque on Friday, yet during his rule from 1993 to 1998 he successfully spirited $4 billion into the family’s private accounts in Switzerland. In 2006, the Swiss authorities returned $500million to Nigeria.

But there is a sweetness in the story which is seldom told. Inthe same year, 2006, Abacha’s family returned $750 million to government. Soon after that the government could not account for $705 million of that amount! In other words, as soon as the Abacha family returned the money, some top government officials, obviously including those who were loudest in condemning Abacha, also stole it.

The saddest day in Ghanaian politics was March 26, 2017 when the British High Commission in Accra issued a statement to comment on the visa fraud by some Ghanaian MPs. One of them took his 16-year-old daughter on a summer holiday to London and the girl disappeared.

The statement prayed that “The Ghanaian Parliament should not be a location where unregistered visa agents approach Honourable Members and act as a conduit for them to participate in visa fraud.”

The shame, were it not so criminal.

Permit me, dear reader, to comment on last weekend’s NPP-NDC political violence in the Odododiodoo constituency. Did you hear Nii Lante Vanderpuye when the media interviewed him? He had some strong words for the police in his area, accusing them of inaction.

In 2012, macho men described as his hirelings were pictured in an Accra daily holding “satanic stones” (courtesy: the late Atukwei Okai) and sticks with which they brutally assaultedUrsula Owusu. The police made no arrests. Nii Lante didn’t speak.

But how do we expect Ghanaian police to touch criminals belonging to any party in power? The Divisional Commander has his instructions from the IGP. The IGP is appointed by the incumbent President.

Bukom Banku’s interview offers the solution: arrest both NDC/NPP contestants and make a public show of them. There will be peace thereafter.