Kanye and his wife Kim

Kim Kardashian West screamed and cried when she heard about her husband Kanye's controversial comments on slavery, she has revealed.

The US rapper said last month that the enslavement of African Americans over centuries might have been a "choice".

He has since addressed the row with his wife in a song on his new album.

She added that the couple "have different views at times". 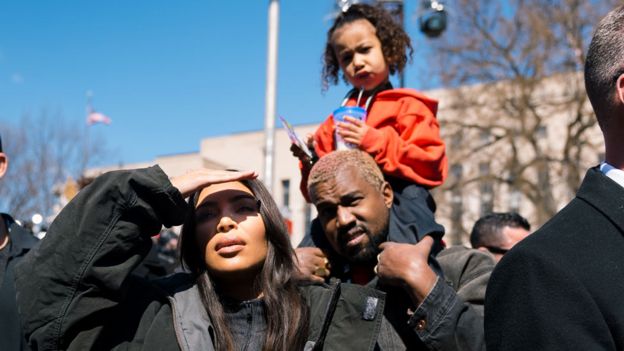 Kim and Kanye with their daughter North, attended the March for Our Lives demonstration

Her husband had said in an appearance on TMZ: "When you hear about slavery for 400 years... for 400 years? That sounds like a choice."

In a track on new album Ye, West refers to the row between the pair, with lyrics: "My wife callin', screamin', say 'we 'bout to lose it all'/Had to calm her down 'cause she couldn't breathe."

Kardashian West said the song, Wouldn't Leave, was the last one that he played to her.

"That's not stuff we put on social media, but we have those moments that that was the one song that he didn't really play for me until last minute, so I heard that last minute and it meant a lot to me," she added. 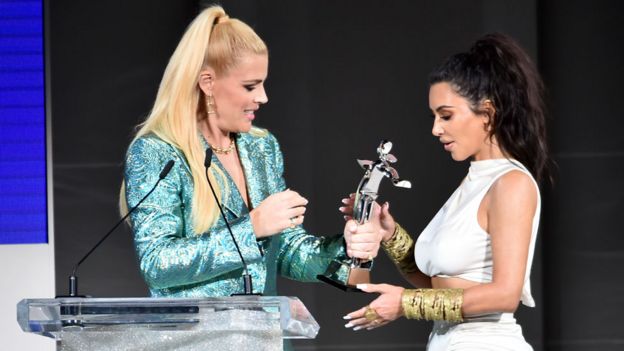 She received her award from Busy Phillips

The Keeping Up with the Kardashians star said her husband is "the most genuine person".

She said: "He might say things that might get misinterpreted and people don't see the context behind it, but I always know his heart, so I'm glad that it was really well-received."

Sometimes the context of his comments is not understood, the mother-of-three added.

"I know what he really means when he says something and I know people will too at some point," she said.