Grammy-nominated artiste, Burna Boy, is receiving a lot of flak on social media after proclaiming himself as the greatest Nigerian musician ever after Afrobeat legend Fela Kuti.

Burna Boy on Wednesday took to Twitter to say “fact! I always know I was and I am the best. Everyone you think is the best knows I’m best since Fela Kuti.”

The tweet did not end there, it continued, “But Timaya told me something a long time ago that made me not to care about being the best [because] the world can do without the best and the world will still spin regardless.”

The ‘African Giant’s statement did not sit well with some people, especially Nigerians who argue that Wizkid, Davido among others paved the way for him to attain the limelight.

One bothered Twitter fan, Jezzy Joseph, in a repost asked Burna Boy where he was when Afrobeat was struggling to hit mainstream between 2010 to 2018.

He added, “the best paved the way for you. You came in when the table has already been set and here you’re claiming the BEST since Fela.”

Jezzy provoked Burna Boy who came back to hit him hard:

“Lol. Nobody paved shit for me. Everybody dey find them own. I bin [sic] out here, if you knew the way they made us look weak by begging and paying the western world to like us you will see that no table was set and I’m the one that brought you the Respect you currently enjoy,” he said.

Burna Boy’s reply has angered many fans on Twitter who claim he is an arrogant musician.

Meanwhile, there are core fans throwing their weight behind the ‘Ye’ hitmaker for stating nothing but facts.

Check out some of their reactions below: 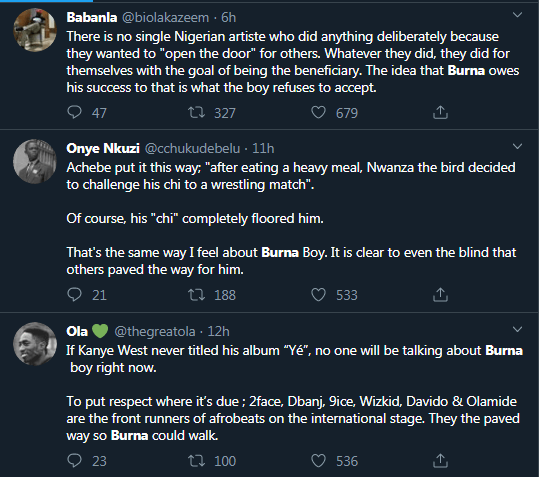 Wizkid spent almost 4 months in the US last year. Making good music with the powerhouses of Hollywood.

Davido also have been consistent matching records set by the likes of 2face, Psquare and D’banj.

Now we have Burna Boy(Van Dijk) “ 2 season wonder” who thinks he is the Best!

If you don’t geddifok with all your refurbish songs🤡

#Burna boy didn't win and he is posting shits like this, now let's imagine he won the award.... We will probably be dead by now

Burna is actually funny... Lmao
Even Fall by Davido is bigger than all his music .#Davido #Burna
Not to talk of If oo
This are the songs that gave Nigeria Recognition First of all
Not because u are nominated for Grammy changed the fact that u are better than Davido Starboy

All I know is Burna boy didn’t need any international collaboration to become a thing in the western world. Nobody paved anything for him, he has earned his bragging rights.

Let him be proud in his achievements, you can keep your faux humility to yourselves.

This was 2015 when Burna Boy was relatively the Everton of the premier league.

Man just qualified for Champions League and all he can do is disrespect everyone?

Burna Boy is a cultural pride. A proud representation of the power of Nigeria’s soft power. May his star continue to shine and his talent continue to find expression on the world stage. As for me and my house, this culture must take over the world!

Burna Boy: I don’t care about streams and views because they’re fake

Burna: I’m so happy to be recognized for Grammy...

Burna: Nobody paved way for me..

Exactly bro like we don't how he's taping from fela's song to make hit🤦. He's quite good but he's over doing it already

These are the people that built the Nigerian music industry for me & have been consistent , I was stanning Burna on something else entirely .

Burna sent a fan away for not dancing at his show

Burna claims he did it all himself without honoring the OG's

Wow!!! So Burna boy believes he "brought us the respect that we are enjoying".

Wizkid,Olamide and Davido and co remained consistent for a decade and neither of them are declaring they are the best.

my opinion, Burna said nothing wrong. He has a right to his opinion. it might not be your fact doesn’t alienate what he feels. A king can be a king in his own right. Is he exceptional? he is..is he an outstanding artiste, yes he is..we need to get out of our feelings & read more

Is bitcoin's 2020 rally another flash in the pan?