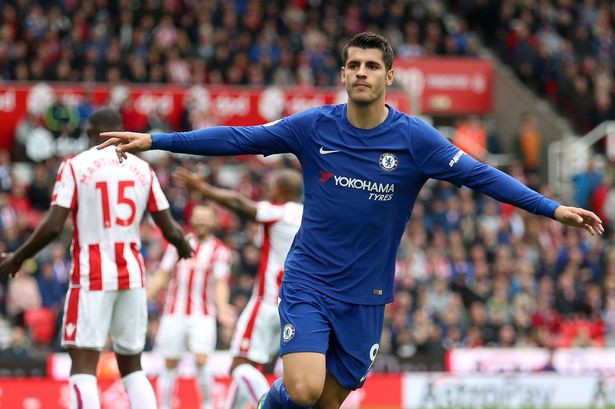 Chelsea romped to a 4-0 win over Stoke City at bet365 Stadium courtesy of a hat-trick from Alvaro Morata.

Alvaro Morata continued his stunning start to life at Chelsea with a hat-trick as the Premier League champions sealed an impressive 4-0 victory away to Stoke City.

Chelsea scored from their only two shots in the first half, Morata putting them in front after just 82 seconds before fellow Spain international Pedro netted his second goal in his last three games.

Stoke increased the pressure after the break, but former Real Madrid striker Morata doubled his tally with a brilliant solo goal to end home hopes of a revival.

And Morata then made it six goals in as many Premier League appearances for Chelsea as he sealed his hat-trick with eight minutes remaining.

Philippe Coutinho scored a brilliant first goal of the season and Jamie Vardy had a penalty saved as Liverpool survived a Leicester fightback to end their run of four games without a win.

The Foxes won 2-0 in their Carabao Cup third-round meeting on Tuesday, but the Reds exacted revenge on their return to Premier League action.

Free-scoring Manchester City added to Crystal Palace's mounting misery with a 5-0 win at the Etihad Stadium, a result that sent Pep Guardiola's men top of the Premier League.

Palace are the only team without a goal in Europe's five major divisions this season after a sixth straight top-flight defeat, and the scale of the task facing the recently appointed Roy Hodgson is thrown into a stark light by a fixture list that places Manchester United and Chelsea next on their agenda.

Romelu Lukaku scored his eighth goal in as many games for Manchester United to seal a 1-0 victory away to Southampton on Saturday.

The Belgium international converted a rebound in the first half to give Jose Mourinho's side a fifth win in six Premier League games and keep pace with Manchester City at the top of the table.

In other games, Everton recovered from a goal to inflict a 2-1 defeat on AFC Bournemouth, Burnley drew goalless with Huddersfield Town, Swansea City shockingly dropped points at home against Watford Tottenham Hotspur held on to see off Andre Ayew’s West Ham 3-2 away from home.