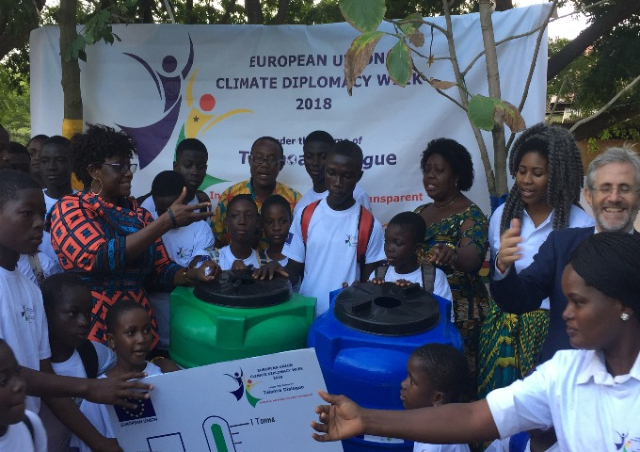 The European Union Delegation to Ghana has launched Climate Change this week under the theme ‘Talanoa Dialogue on Climate Solutions.’

This was in collaboration with its implementing partners Environment860 and Ga East Municipal Assembly.

The week will run between September 24-28 and has a variety of acts ties planned to encourage children introducing the Reducing Reusing and Recycling (3Rs) principles into their lives.

To support this initiative the EU has donated 50 recycling bins to the Green View Valley Environmental Clubs in the Ga East.

The Valley View Environmental Clubs are an initiative of the Ga East Municipal Assembly to help form sustainable habits in children during their formative years.

Recyclable waste generated from bins will be collected be Environment360 and sold to third parties.

A portion of the revenues till then be apportioned back to the environmental clubs to support them in carrying out a variety of activities for their schools and the surrounding communities.

In addition to the donation of bins, the EU is also hosting a school play 500 school children in the Ga East Municipal District as well as hosting a recycling a contest among eight private schools in the Accra area.

Paolo Salvia, Acting Head of the EU Delegation mentioned in his opening speech that “building resilient societies cannot be delayed and children will have a crucial role in the contribution to a greener and sustainable future in Ghana”.

Janet Mensah Tulasi, the Municipal Chief Executive (MCE) stated that “Climate change is a global problem today and Ghana is not of exception justifying the launching of EU Climate Diplomatic Week here certainly appropriate and relevant.”

She also noted that currently there are 87 students enrolled in the environmental clubs which are mainly operated by teachers at the schools.

Founder and Executive Director of Environment360, Cordie Aziz, stated that she is looking forward to the week's activities and feels that the activities will have a great impact on the students participating.

“The EU Delegation to Ghana's support to the recycling club, the school play and recycling contests are great ways to help build awareness in children about how they can help combat climate change.

“We are happy to be a part of this year's celebration as we support sustainable habits in Ghana."