Surgeons in Cambridgeshire have performed the first heart transplant in Europe using a non-beating heart.

Donor hearts are usually from people who are brain-stem dead, but whose hearts are still beating.

In this case, the organ came from a donor after their heart and lungs had stopped functioning, so-called circulatory death.

Papworth hospital says the technique could increase the number of hearts available by at least 25%.

The recipient Huseyin Ulucan, 60, from London, had a heart attack in 2008.

He said: "Before the surgery, I could barely walk and I got out of breath very easily, I really had no quality of life."

He said he was "delighted" with the improvement in health since the transplant.

"Now I'm feeling stronger every day, and I walked into the hospital this morning without any problem," he said.

There have been 171 heart transplant in the past 12 months in the UK.

But demand exceeds supply, and some patients have to wait up to three years for a suitable organ.

Many patients die before an organ becomes available.

Non-beating-heart donors provide kidneys, livers and other organs, but until now it has not been possible to use the heart because of concerns it would suffer damage.

The new procedure involved re-starting the heart in the donor five minutes after death and perfusing it and other vital organs with blood and nutrients at body temperature.

The lead transplant surgeon, Stephen Large, said: "We had the heart beating for about 50 minutes, and by monitoring its function were able to tell that it was in very good condition."

The organ was then removed and transferred to a heart-in-a-box machine, where it was kept nourished and beating for a further three hours before the transplant surgery at Papworth.

The organ care system is also used for maintaining lung, liver and kidneys outside the body.

The standard method for transporting hearts and other organs for transplant is to pack them in ice, but some organs can be damaged by this process.

The Papworth team said that restoring the heartbeat after death and keeping the organ nourished had helped reduce damage in the heart muscle.

The first heart transplants in the 1960s used organs from non-beating heart donors, but the technique was abandoned because they deteriorated too quickly. 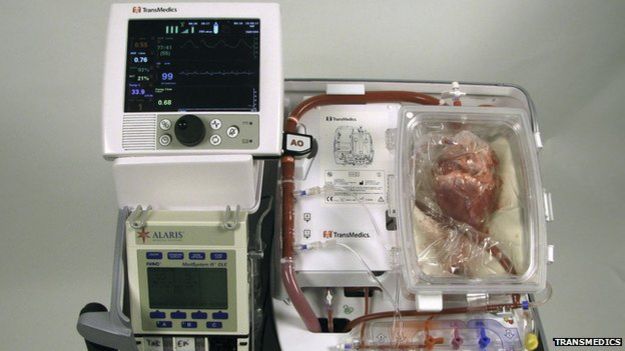 TransMedics, the US company that makes the organ care machine, said each unit cost £150,000 plus £25,000 per patient transplanted.

Papworth and Harefield hospitals are the only two heart transplant units in the UK who use the device.

Prof James Neuberger, associate medical director for organ donation and transplantation at NHS Blood and Transplant, said: "Sadly, there is a shortage of organs for transplant across the UK and patients die in need of an organ.

"We hope Papworth's work and similar work being developed elsewhere will result in more hearts being donated and more patients benefiting from a transplant in the future.

"We are immensely grateful to the donor's family, and we hope they are taking great comfort in knowing that their relative's organs have saved lives and have also made an important contribution to heart transplantation in the UK."