The European Central Bank has unveiled fresh stimulus measures to bolster the eurozone, including cutting a key interest rate.

The deposit facility rate, paid by banks on reserves parked at the ECB, was already negative, but has now been cut from minus 0.4% to minus 0.5%.

The ECB also said it was re-starting quantitative easing. It will buy €20bn of debt a month from 1 November.

The eurozone's main interest rate has remained unchanged at zero.

The moves come as the ECB combats an economic slowdown. The bank said its asset purchase programme would "run for as long as necessary", while interest rates would remain "at their present or lower levels" until eurozone inflation reached its target rate of 2%.

Quantitative easing, or QE, is a way for central banks to pump money into the financial system when interest rates are ultra-low and conventional stimulus methods no longer work.

Making more money available in this way is supposed to encourage financial institutions to lend more to businesses and individuals. 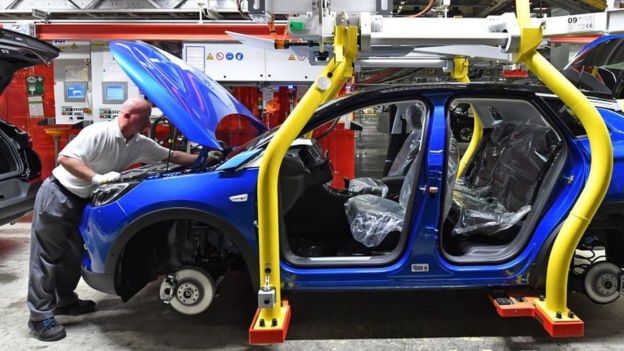 The eurozone's biggest economy, Germany, is thought to be on the brink of recession

ECB chief Mario Draghi told a news conference that the inflation outlook had been further downgraded.

"Headline inflation is likely to decline before rising again towards the end of the year," he said.

Mr Draghi also announced that the ECB had lowered this year's and next year's GDP growth forecasts for the eurozone. It now expects growth of 1.1% this year and 1.2% in 2020.

He said the eurozone was suffering from the "prevailing weakness of international trade in an environment of prolonged global uncertainties".

The eurozone's biggest economy, Germany, is widely thought to be on the brink of recession.

The ECB's decisions drew a swift reaction from US President Donald Trump, who tweeted that the ECB was "trying, and succeeding, in depreciating the euro against the VERY strong dollar".

European Central Bank, acting quickly, Cuts Rates 10 Basis Points. They are trying, and succeeding, in depreciating the Euro against the VERY strong Dollar, hurting U.S. exports…. And the Fed sits, and sits, and sits. They get paid to borrow money, while we are paying interest!

Responding to Mr Trump's comments, Mr Draghi referred to him as "the First Tweeter".

"We have a mandate, we pursue price stability, and we do not target exchange rates, period," he said.

Mr Draghi is due to make way for incoming ECB President Christine Lagarde on 1 November.

The ECB's main refinancing rate has been at zero since March 2016.

"At first glance, the ECB has not quite thrown the kitchen sink at the eurozone economy," said Ranko Berich, head of market analysis at Monex Europe.

"The QE package is shy of market expectations, which were €30bn a month. But the Bank is clearly back in the business of serious policy easing and more aggressive action could easily be taken in response to a worsening in conditions."

So the ECB has fired off another volley of its monetary policy ammunition. But will it hit the target? Will it get inflation up towards the ECB's target and will it stimulate the eurozone's flagging economy? Many people are very sceptical.

The interest rate move takes us even further into the strange world of negative rates. There is a view that that measure is actually counterproductive, that it has an adverse impact on bank profitability. Perhaps ECB policy more widely has reached the limit of its ability to stimulate economic activity.

The other main weapon against economic weakness is in the hands of governments – fiscal policy, or public spending and taxation. For some governments in the eurozone, their scope to use that weapon is constrained by the amount of debt they already have and by eurozone rules. But the likely next head of the ECB, Christine Lagarde has called for more action in that area.

Countries such as Germany have strong government finances, but so far have been wary of departing from what they see as prudent financial management. There is, however, a growing debate about what the eurozone needs.