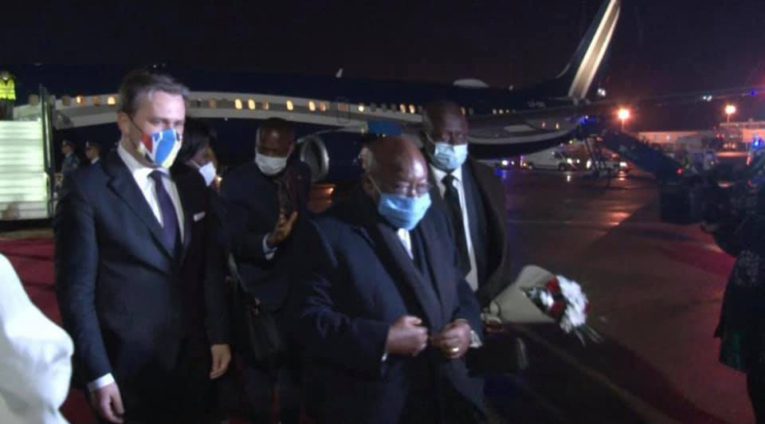 Parliament is expected to resume from recess on October 26.

In a post on Facebook, Mr Ablakwa noted that all forms of ploys or stunts orchestrated towards preventing government from being accountable in this regard, will be unsuccessful.

Describing the foreign trips by the President as ‘Arabian-king-style’, he stated: “May I state for the record that despite government’s shenanigans and attempts at obfuscation, our comprehensive tracking system makes it impossible for the President’s profligate travels to escape our vigilance.

“This means that the good people of Ghana can be assured that when Parliament resumes, every one of these Arabian-king-style trips and every single minute of flight time plus every associated incidental cost at the taxpayer’s expense shall be accounted for to the People’s Representatives.”

According to the North Tongu MP, the President has deceived Ghanaians about being a protector of the public purse.

He said the President’s recent trip cost the taxpayer ¢3.5 million. According to him, President Akufo-Addo chartered LX-DIO on Sunday to attend the 60th anniversary of the Non-Aligned Movement.

“Just to illustrate from our latest tracking: President Akufo-Addo took off aboard the LX-DIO to Belgrade at 12:22pm last Sunday from Accra. He landed in Serbia at 8pm local time. The President arrived back home at 5pm today. The LX-DIO was ordered on Saturday 9th October, 2021, leaving its base in Luxembourg and landing in Accra at 12:46pm local time on Saturday after a brief stop in Abuja. Ghanaian taxpayers therefore paid for the overnight waiting period.

“At a conservative estimate of 42 hours of aircraft lease duration, the suffering Ghanaian taxpayer is coughing up nothing less than US$588,000 which translates to a scary GHS3.5million,” he bemoaned.

He noted that the recent travel has been confirmed by the Serbian Foreign Ministry although the Ghana government has denied that the president on his trip to Belgrade, employed the services of the said aircraft.

Mr Ablakwah pointed out that official photographs of President Akufo-Addo disembarking the LX-DIO as he arrived in Belgrade on Sunday have been put out by the Serbians.

For him, the Serbian government exposing the dishonest elements at the Presidency “reveals just how scarce commodities such as transparency, accountability and respect for the citizenry have become under a leader who hitherto touted his self-professed good governance credentials.”

FM #Selakovic welcomed @NAkufoAddo, President of #Ghana, one of the 5 countries which paved the way for the #NonAlignedMovement, to Belgrade for #NAM60Belgrade commemorative meeting; we’re glad that the daughter of the then-Ghanian president, Kwame Nkrumah, is also in #Belgrade. pic.twitter.com/3FjVapKlK2

He is of the belief that the President continues to contemptuously defy public outcry due to his desire to have a new bigger luxurious presidential jet.

The North Tongu legislator defended his position by stating that although members of the general public have been informed that the presidential jet, Falcon jet is unsafe, a reason the President hires aircrafts for his travels, African Presidents continue to queue for use of the country’s presidential jet.

With all these, coupled with calls for accountability, the MP urged the President to reflect on the legacy he would be remembered for if such overspending continue to occur.

“May we hope that after being reminded of the global inspiration, vision, modesty and sacrificial leadership of the Osagyefo Kwame Nkrumah who together with Tito, Nehru, Nasser and Sukarno established the NAM some 60 years ago, President Akufo-Addo will be compelled to reflect on his own legacy and how he would like the world to remember him,” he concluded.