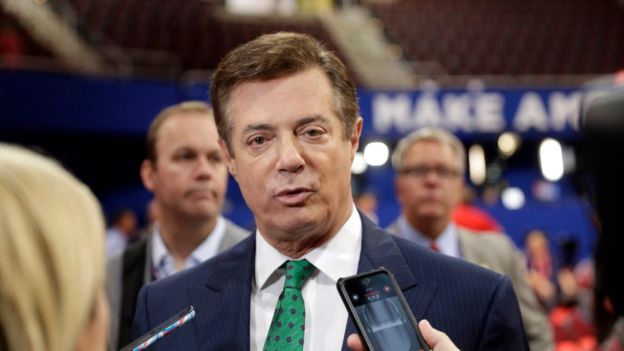 US President Donald Trump's former campaign chief Paul Manafort has been jailed for 43 more months on charges stemming from the Russia investigation.

It comes a week after the 69-year-old was given a 47-month prison sentence for fraud in a separate case.

Speaking from a wheelchair, he told the federal court in Washington DC that he wanted to apologise for his actions.

In a separate development, Wednesday also saw Manafort charged in New York with residential mortgage fraud and other crimes.

President Trump has the power to pardon his former aide for the federal crimes – but not for the charges brought in New York.

"I do feel badly for Paul Manafort, that I can tell you," Mr Trump told reporters after the sentencing on Wednesday.

Asked if he was planning to pardon Manafort, the president answered: "I have not even given it a thought, as of this moment. It's not something that's right now on my mind."

Both cases for which Manafort has been convicted stem from an inquiry into alleged Russian election meddling in the 2016 US elections.

None of Manafort's charges, however, relates to allegations of collusion with Russia. Mr Trump has always denied the charge, describing the inquiry as a "witch hunt".