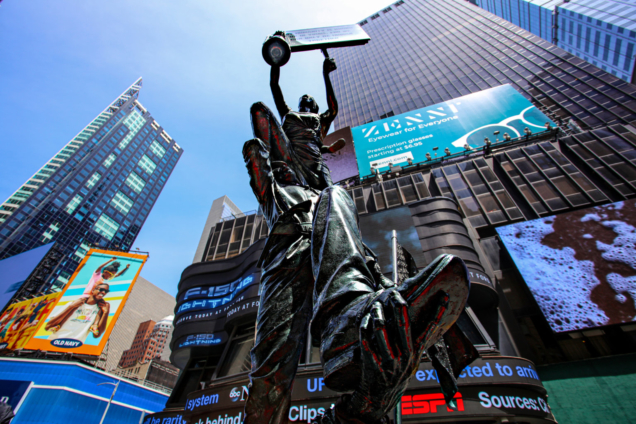 A Ghanaian artist traveled to Times Square on June 25 to share his view of the Black experience amidst racial tension as the nation braced for the sentencing of Derek Chauvin, the ex-Minneapolis police officer convicted of murdering George Floyd.

Newly-returning tourists and locals were stopped in their tracks on Friday by a towering, ebony statue depicting what artist Kwame Akoto-Bamfo views to be the foundation and struggle of Black history.

According to the sculptor, this pop-up exhibit delves into the white supremacist glorification of Civil War monuments. Akoto-Bamfo takes the traditional image of a Confederate soldier on horseback leading a charge, depicted on many such monuments, and reimagines it to reflect the African American experience before, during, and after the Civil War.

Illuminated by the array of gigantic screens lining the heart of the city, murmurs convened around Akoto-Bamfo’s artwork named the Blank Slate Monument, discussing the poignancy of the piece amid the sentencing of Chauvin, with many feeling that both the trial and the sculpture reflected Black life in America.

A judge ultimately sentenced Chauvin to serve 22 1/2 years behind bars for Floyd’s murder.

Kwame Akoto-Bamfo’s artwork details the Black experience before, during, and after the Civil War. Photo by Dean Moses

The statue portrays the steps leading to freedom, the commencement of which is a slave kneeling at the base, and although his hands are bound, his body supports a Black union martyr gripping the American flag with a noose around his neck.

At the top of the totem roars a mother, protesting for liberation while holding a picket sign which viewers can send messages to from their cellphones, creating an ever-changing, ever-evolving sentiment told by those who view it developing it from a mere visual spectacle to an interactive demonstration.

Akoto-Bamfo said this represents the contemporary fight for freedom, equality, and a better future for the mother’s child.

“It means everything to me to have this here today. It’s most important that for the people who can see and the love ones for George [Floyd] and the people who have observed passively through social media are able to express their sentiments through the piece like you can see we have all kinds of people using all kind of languages to be able to express their experience and their grief for what happened to brother George Floyd,” Akoto-Bamfo told amNewYork Metro.

Kwame Akoto-Bamfo describes his sculpture as a reflection of the steps toward Black American liberation.

The sculpture took a year to complete and was originally designed to be toured around the United States after its finalization in 2019; however, due to the COVID-19 pandemic, the tour was unable to get underway until recently.

“Now we are able to tour, and contribute, and have a dialogue with people through the artwork. It’s really about interaction because I want people who live the experience to have the opportunity to be able to express themselves and not have me as an artist explain the symbolism of the piece,” Akoto-Bamfo said, watching passersby gaze up at his work.

Akoto-Bamfo applied for a permit to showcase the piece in Times Square through last Friday evening; he hopes to be able to hold it in other locations around New York City before he returns to Ghana.

Although no dates are set, Akoto-Bamfo shared that the sculpture will be exhibited in Washington DC, Selma and Birmingham, Alabama, and more. Akoto-Bamfo has been tracing African heritage and history for the past 11 years with his work. He has created over a thousand portraits in commemoration of African ancestors who were enslaved. His work covers the transatlantic slave trade and the legacy and aftermath of slavery.

Mellisa Mahadeo—a pedestrian who happened on the statue by chance—was instantly struck by the symbolism of it, encouraging her to stop in her tracks and fully observe the piece.

For the past year, Mahadeo has been following the Black Lives Matter movement, and she believes this statue is perfect representation of the struggles Black Americans have faced throughout history and within the current climate.

Passersby stop in their tracks to observe the poignant monument.

“I haven’t seen a monument like this before. The overall image looked familiar but there is something a little more significant here. I love it. I think it is an accurate representation of the historical information that we were not taught in school. I think it is super significant for people to see it now especially during the world we live in,” Mahadeo said.