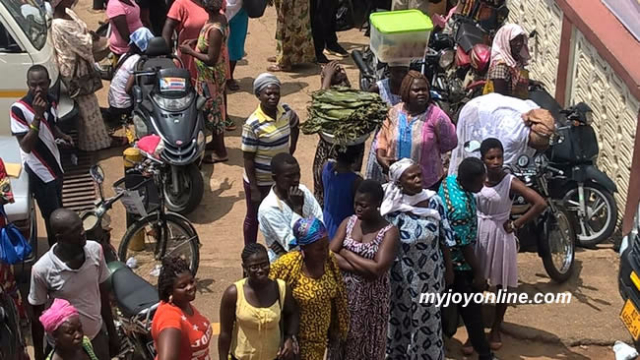 Family members of inmates have gathered at the forecourt of the Kumasi Central Prisons hoping their relatives on remand would gain their freedom following the intervention of the Justice For All Programme.

The relatives stood in the sweltering heat Friday afternoon as judges tried 174 remand inmates acussed of various crimes from rape to narcotics.

Abena Adumtwumwaa a 41-year old mother told Joy News' Mohammed Nurudeen she had been waiting for several hours hoping her 24-year-old son, accused of raping a 38-year old lady, would be released.

He was eventually freed much to the delight of the mother. According to her, all attempts to secure bail for her son failed and was thankful for the justice for all programme.

"I am excited that, my toil has come to an end. I [will] slaughter a chicken today to celebrate" she said. He was found  not guilty in Friday's proceeding of the Justice For All Programme, a judicial intervention to speed up justice.

Akwasi is one of 174 remand inmates who is hoping to be reintegrated into the society after an excruciating experience in jail.

Meanwhile, a list submitted to the Justice For All Programme for speedy trial of remand prisoners in the Kumasi Central Prisons, did not have suspects for murder and armed robbery.

Joy News’ Seth Kwame Boateng reported that the judges expressed surprise after the finding which he says could be an oversight or an omission by the Prison Service.

Explaining the process for selecting inmates to be tried through the Justice For All Programme, Seth Kwame Boateng said that paralegals visit the prisons and interview the entire remand population.

The paralegals submit the list to the Prison Service where it is whittled down and forwarded to the Justice For All Programme (JFAP).

The programme is designed to actualize the maxim that ‘justice delayed is justice denied’.

Judges under the programme have been visiting the prisons following another documentary highlighting the dehumanizing conditions of inmates in the prisons.

It is an accepted view that Ghana’s prisons are severely overcrowded and inmates suffer several health problems in the depressing prison houses.

After freeing 11 remand prisoners from the Nsawam prison in the Eastern region three days ago, the JFAP has moved to the Kumasi Central prisons in the Ashanti region which has a remand population of at least 600.

The figure was reviewed to at least 174 cases, mainly narcotics and rape suspects.

Some inmates have been languishing in prisons for years while others are yet to be brought to court for further hearing of their cases.

The fortunate 174 inmates are hoping that they can gain their freedom, a highly cherished commodity in a place where pain, suffering is dominant.