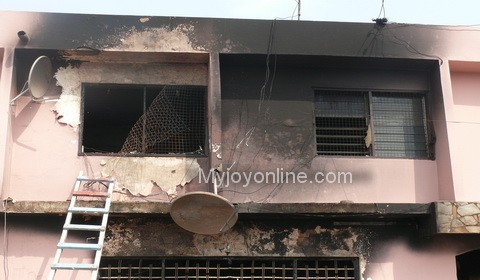 Three members of a family have been burnt to death in their sleep in the early hours of today, Tuesday, January 3.

David Nii Teiko Ammah, 67, his wife Gifty Ammah, 51 and their daughter, Phibi Ammah, 10, died when their Asylum Down storey building in Accra caught fire while they slept.

Their bodies have since been deposited at the Police Hospital mortuary.

When the news team got to the scene of the accident, family members had gathered, shedding tears and mourning the departed souls.

Ammah was a businessman; Mrs. Ammah, a trader while Phibi attended the Services Primary School at Burma Camp in Accra.

Narrating the story to Asempa News, an eyewitness Richard Ammah, who is a nephew of the late David Nii Teiko Ammah said the wild barking of a dog in the house at around midnight alerted him of something amiss.

He said the barking brought all the people in the house out of their rooms only for them to realize his uncle’s part of the compound house, a storey building had caught fire.

He said they managed to break the wall of one of the rooms on the ground floor to save two young boys who were asleep but realized that the Mr. Teiko Ammah, his wife and daughter who slept upstairs had been burnt to death.

The cause of fire was yet unknown but was believed to have started from the ground floor.